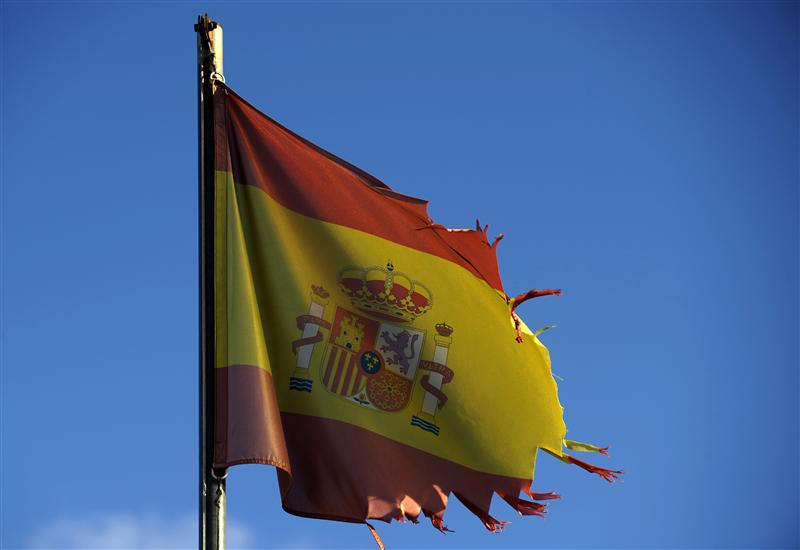 The Catalonia issue rages and the rise of Podemos shows how much Spaniards are fed up with corruption. It could lead to a three-way split election in 2015. The upstart protest movement still has much to prove – but the mainstream parties look clueless as to how to respond.

A torn Spanish national flag flutters at an industrial area in Gijon, northern Spain November 6, 2012. The European Commission is to forecast Spain's economy will be almost as dire next year as this, a newspaper said on Tuesday, raising the pressure for a euro zone bailout and undermining government promises that 2012 will mark the low point

Spanish Prime Minister Mariano Rajoy ruled out talks on a possible referendum on independence in Catalonia on Nov. 12, three days after more than 2 million Catalan citizens took part in an informal consultation, or about 37 percent of those eligible to vote. He urged Catalonia to seek a constitutional reform to resolve its political problems with Madrid.

Meanwhile, Podemos, a Spanish political party formed 10 months ago, would come a close third in a parliamentary election, according to an official poll published on Nov. 5. The next general election is due in late 2015.

Podemos was the most preferred party in the survey from the Centre for Sociological Investigations (CIS), with 17.6 percent of those polled saying they would vote for it, compared to 14.3 percent for the Socialists and 11.7 percent for the PP.