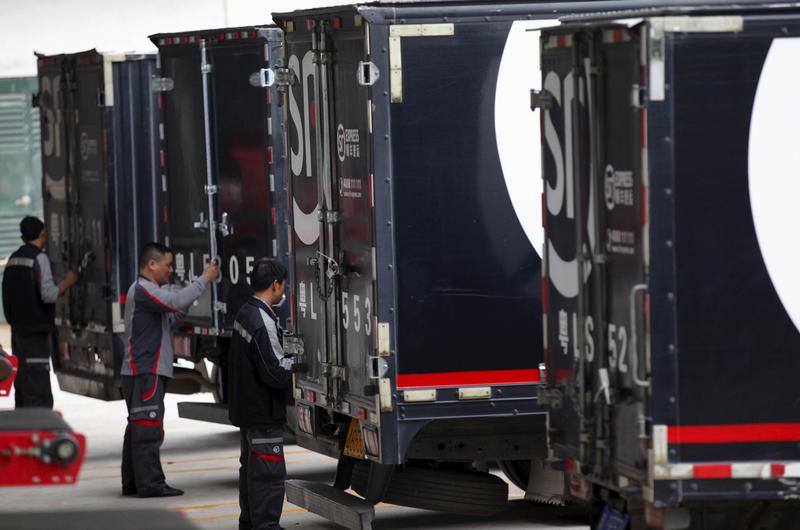 The e-commerce giant has resolved an information-sharing dispute with delivery partner SF Holding for now. But the squabble shows the risk uncooperative partners pose to Jack Ma’s plan to use cloud technology and AI in shopping, logistics and finance. Expect more tiffs to come.

Vehicles of S.F. Express parked at a logistic centre of the company, in Huizhou, Guangdong province, November 11, 2014. Diesel has found an unexpected ally in the growing legion of delivery trucks spawned by China's rapidly expanding e-commerce, forestalling any drop in the country's consumption of the fuel as the economy shifts its focus away from manufacturing. Picture taken November 11, 2014. To match CHINA-DIESEL/DEMAND REUTERS/Stringer CHINA OUT. NO COMMERCIAL OR EDITORIAL SALES IN CHINA - RTX1GV4W

The two firms had severed a data sharing agreement on June 1, following SF's claims that the Alibaba unit in May had requested "unrelated customer privacy data", a claim Cainiao denies.

China's State Post Bureau on June 2 urged the two sides to end the dispute, saying agricultural shipments had been affected.

“We are pleased that the issue has been resolved and are grateful for the guidance of the State Post Bureau on the matter,” a Cainiao spokesman said in an emailed statement.

SF is one of several top logistics firms that have a strategic partnership with Cainiao, which operates a network that links data from Alibaba's e-commerce platform to delivery and logistics partners. The service allows users to track and pay for deliveries. As of March 2016, Alibaba owned a 47 percent stake in Cainiao.