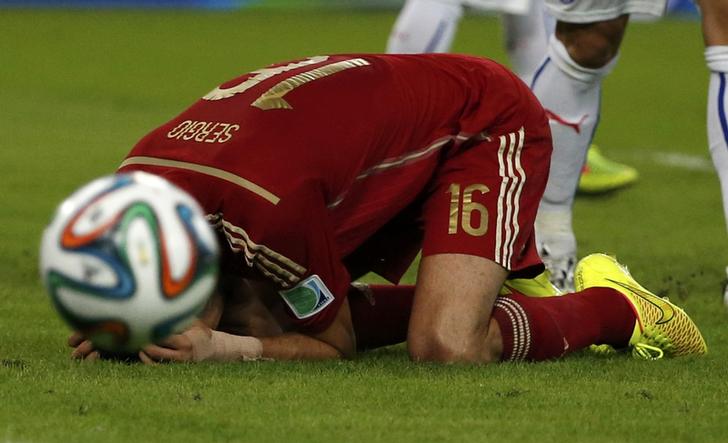 The unthinkable has happened. Spain stayed in the euro but exited the World Cup in the early group stages. The negative correlation with the economy is striking. Spain’s national side has modernised less rapidly than its economic policy in recent years.

The shock exit from the soccer tournament after two consecutive defeats in the group stages is ignominious – reigning champions rarely do quite so badly. The poor showing ends a six-year winning streak in international competitions.

Spain’s golden age in soccer began just as the country was succumbing to a prolonged financial crisis. When the country won the World Cup in 2010, commentators even wondered whether success on the pitch would mark a turning point in the economy. An ABN Amro study suggested victory could boost the winner’s GDP by 0.7 percent. Others predicted a big boost to tourism. In fact, winning wasn’t enough to pull Spain out of the recession that year, nor in 2012 when it won the European cup amid “Spanic” about “Spexit” – Spain’s possible exit from the euro.

If soccer success did not cause prosperity, nor does Spain’s recent economic bounce-back have much to do with its failing form in the game. The better explanation would be a simple failure to adapt strategy to changing competitive dynamics. Spain’s former prowess had a lot to do with a pioneering passing technique dubbed tiki-taka. In time, the competition got wise to this; Spain’s tactical advantage was eroded.

The defeat in Brazil came on the eve of the coronation of new King Felipe VI. In his first speech as monarch, Felipe spoke of the need for renewal and change. Kings and football teams both project national glory. Small wonder there are cries for a similar regeneration of the Spanish soccer team after their abdication of the crown.

The Spanish national soccer team lost 2-0 against Chile on June 18, precipitating the reigning champions’ exit from the World Cup in Brazil.

Felipe VI will be sworn in during a low-key parliamentary ceremony on June 19.

Spain's Sergio Busquets reacts after missing a chance to score a goal during their 2014 World Cup Group B soccer match against Chile at the Maracana stadium in Rio de Janeiro June 18, 2014.

The Spanish national soccer team lost 2-0 against Chile on June 18, precipitating the reigning champions’ exit from the World Cup in Brazil.

Felipe VI will be sworn in during a low-key parliamentary ceremony on June 19.