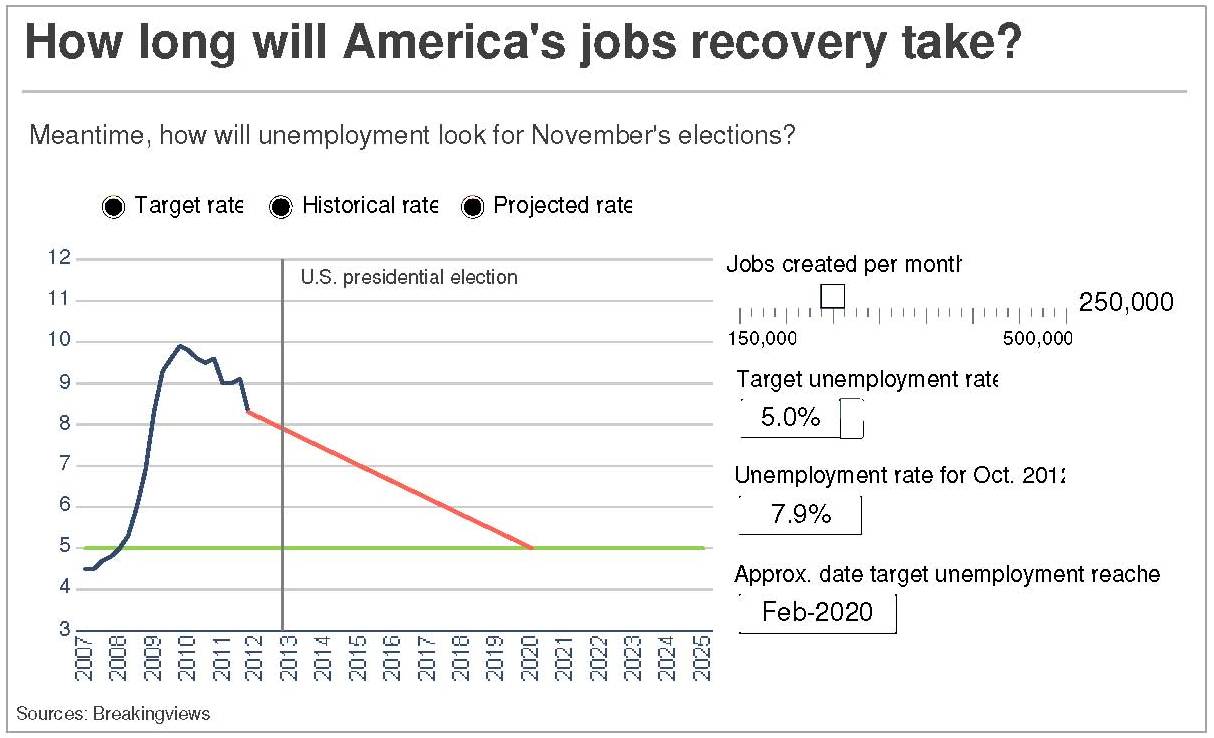 There’s still a long slog ahead for the unemployed in America. Jobs growth has started picking up. But even at a rate of 250,000 a month, a hair above January’s figure, full employment may not be reached until 2020. A new Breakingviews calculator shows how a faster or slower rate of job creation changes that picture.

The important headline variable is the jobs growth reported in the U.S. monthly employment report – the stronger, the better. But a few other factors also matter when looking ahead. One is population growth, and another is how quickly the labor participation rate increases toward a more typical level. That’s the percentage of the population defined as either working or looking for work.

Since the recent recession began, millions of workers have become discouraged and temporarily given up on finding a job. The labor participation rate has declined from 66.4 percent in 2007 to 63.7 percent in January. Suppose participation recovers to that 2007 level by January 2020. This trend coupled with population growth at the average rate seen between 2003 and January this year would call for almost 200,000 new jobs a month just to hold the unemployment rate – 8.3 percent as of January – steady.

Then there’s the question of what level of joblessness reflects, essentially, full employment, since there will always be people between jobs. The calculator allows this input, as well as the other key ones, to be changed, but starts out assuming that 5 percent unemployment is the target.

With these assumptions, full employment would only be reached again in America in early 2020. If the monthly job creation rate jumped to 300,000, that date would be brought forward nearly four years.

With November’s presidential election never far from the news, the calculator also shows how the unemployment rate might look just beforehand. The actual data for October will be released just a few days before the election, making that employment report the last major economic indicator that may affect President Barack Obama’s re-election chances.

With the base assumptions already outlined, unemployment could dip just below the 8 percent mark in October. For that to happen, Obama needs an economic shock-free spring and summer. But whether he or someone else occupies the White House in 2013, job creation looks set to remain near the top of the agenda.

The U.S. Bureau of Labor Statistics reported on Feb. 3 that 243,000 jobs were created in January, while the national unemployment rate edged down to 8.3 percent. The month’s job creation figure was the strongest since April 2011, and the unemployment rate sank to its lowest level in three years.

In the same report, an annual correction revealed that the labor participation rate was lower than thought at 63.7 percent, the lowest since 1981.