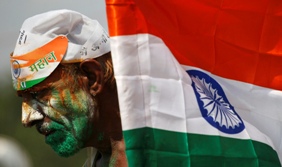 Anti-corruption campaigner Anna Hazare appears to be developing his own party. His cobbled-together group of single issue-activists doesn’t yet look credible. But a well structured third party with 20 or so MPs could be kingmakers in the next election and would offer India a more constructive alternative to the regional parties which have paralysed Indian coalitions. The key will be to find credible leadership and a stable source of funding.

The Indian system is modelled on the UK’s parliamentary democracy. In the last decade, the country has alternated between coalition governments of either the left-leading Congress Party or the Hindu nationalist BJP with a collection of regional parties. The smaller parties are often parochial. For example, West Bengal-based Trinamool has only 19 seats in the 543-member parliament, but has been able to hold up reforms and obtain central government handouts for the heavily indebted state.

Hazare is on the right track. He could look to Germany, where the relatively small Free Democrats, and latterly the Greens, have traded support of the government for key cabinet posts and influence on policy. In India, the need for a new voice is great. A party with a national agenda, not beholden to any one region, could make the country’s political system more effective.

But such a movement cannot rely simply on Hazare’s charisma. It has to develop a new style of political campaigning, targeting 50 or so winnable seats across the country. It would also need untainted cash, perhaps from philanthropists such as Wipro Chairman Azim Premji and the soon-to-retire Ratan Tata.

In addition, mass fundraising could be a way of both campaigning and building momentum. India’s 100 million internet users and 900 million mobile phone owners could be tapped for small sums, a la Obama in 2008. And roping in a Bollywood hero like Aamir Khan, who has become the Oprah Winfrey of India with his new TV show, could add glamour and mass market appeal.

With only two years to go before the next election time is running out. But if India’s reformers get their act together, they could change the nation.

Social activist Anna Hazare and his team announced they would call off their indefinite fast against corruption on August 3 and proposed forming a “political alternative” as an answer to an unresponsive government.
Anna Hazare’s anti-corruption movement during the summer of 2011 forced the government into a series of policy changes, but a proposal to establish a tough anti-corruption ombudsman failed to pass in the Indian parliament.