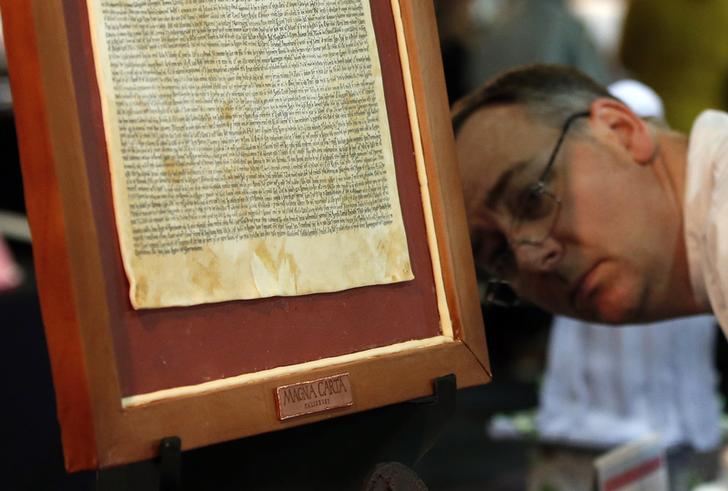 Companies in the 21st century can learn from 13th century England. Overmighty, overpaid CEOs are the new King Johns held to account, sort of, by the barons of fund management. What’s needed is more respect for finance’s neglected yeomanry: ordinary savers. Financial fiefs should be subjected to a modern Magna Carta.

The Runnymede version, signed on June 15 exactly 800 years ago, etched in vellum some important principles of law and justice. Many of its 63 clauses also relate to commerce. Clause 35 of the British Library translation, for instance, decrees: “There shall be standard measures of wine, ale, and corn… a standard width of dyed cloth, russet, and haberject. Weights are to be standardised similarly”.

The Magna Carta was supposed to curb the powers of King John, one of medieval England’s lifetime chairman-cum-chief executives. A group of 25 barons was meant to provide the checks and balances. Their tactics, and effectiveness, echo the way today’s professional fund managers hold company bosses to account.

Like the barons, the fund managers owe their position to a much broader populace. And the pinstripes, like their feudal predecessors, hardly know the yeomanry who provide their wealth. Asset managers would be nothing without the world’s growing population of small investors, pension plan subscribers and insurance policyholders.

Conscientious CEOs know their responsibility to the ultimate owners of global capital. Some 21st century fund managers also make a decent fist of asking bosses to act with the right mixture of personal propriety and industrial perspicacity. Thanks to documents such as the Takeover Code and Corporate Governance Code, UK fund managers might even claim some Runnymede-esque leadership in corporate financial best practice. But the fixation with short-term returns suggests they do not understand, let alone serve, the interests of those to whom they owe their livelihood.

It may take years, centuries even, for today’s still-aristocratic capitalists to renounce power. Corporate democracy would doubtless encounter just the same growing pains, and inadequacies, as the conventional political variety. But it is time to enshrine, in a modern Magna Carta, the basic principle that finance exists to serve its yeomanry, not its kings or barons.

A judge examines a cake in the shape of the Magna Carta on the opening day of the Cake International show in Manchester, northern England, February 6, 2015.

King John of England signed a document which came to be known as the Magna Carta on June 15, 1215.

He promised that if he, his chief justice, any other official or any of his servants “offend in any respect against any man, or transgress any of the articles of the peace or of this security, and the offence is made known to four of the said twenty-five barons, they shall come to us - or in our absence from the kingdom to the chief justice - to declare it and claim immediate redress”.

The Magna Carta stipulated: “No free man shall be seized or imprisoned, or stripped of his rights or possessions, or outlawed or exiled, or deprived of his standing in any way, nor will we proceed with force against him, or send others to do so, except by the lawful judgment of his equals or by the law of the land”.

The British Library translation also says: “All merchants may enter or leave England unharmed and without fear, and may stay or travel within it, by land or water, for purposes of trade, free from all illegal exactions”.