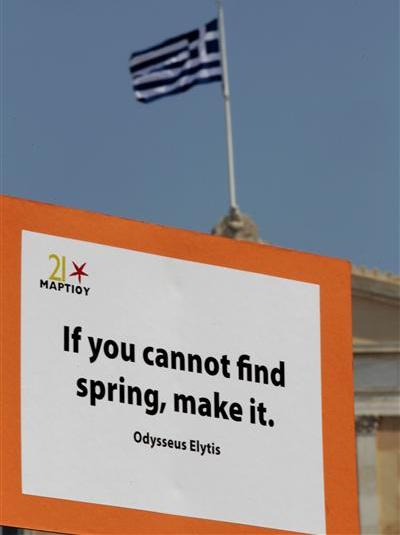 For once euro zone leaders did the right thing, the very thing they have been unable to do throughout the euro crisis: shut up. Their nine-line communiqué to say nothing on the subject was the only sensible option after their informal dinner Wednesday night. The other alternatives would only have made things worse. And whatever the pundits’ or markets’ expectations may be, it’s better for the euro summiteers to keep mum than to pretend having the answer which only the Greeks can provide.

Greece’s euro partners would like the second Parliamentary election, to be held on June 17, to become a de facto referendum on membership of the single currency. But they can’t insist too much without appearing to interfere in the Greek electoral process. The zone’s leaders are most probably ready to offer some concessions on the bailout programme to show that the euro is not just about pain and punishment. But they can’t reveal their hands before the election, because the radical parties rejecting austerity might feel emboldened and demand more concessions ahead of the vote.

Meanwhile, euro zone leaders and the European Central Bank must brace for the worst-case scenario of a Greek chaotic euro exit. But they can’t publicly admit that they’re planning for it, because it could amount to a self-fulfilling prophecy, and because markets turn south every time a European official simply mentions the possibility of Greece leaving the monetary union.

So what’s to do? Keep calm and carry on planning for the day after the Greek election – which, as it happens, will be the first day of the G20 leaders’ summit in Mexico. That may be difficult in a 17-country glass house and a 24-hour news cycle. But euro zone leaders must prepare plans for either dropping Greece, or supporting it with a plan to boost growth in an aggressive way. Strains in Spain, or Italy, might force them to the podium. But silence, in the next three weeks, will be golden.