Angel in the details 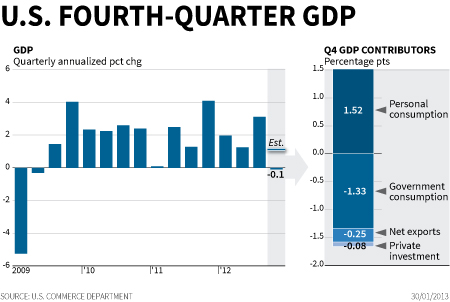 The surprisingly weak U.S. economic output in the fourth quarter contains more than a few silver linings. The nation’s GDP declined at an annualized rate of 0.1 percent, defying expectations of at least 1 percent growth, according to economists polled by Thomson Reuters. Lower government spending accounted for a big slug of the contraction while private consumption and income improved. There’s really little cause for alarm.

Tighter budgets in state capitals and Washington, especially in the Defense Department where outlays fell by $11 billion, excised 1.3 percentage points of growth. So too did inventories, whose growth probably slowed over fears of a looming fiscal crisis. Had both those items been flat, U.S. GDP would have grown at an annualized rate of 2.5 percent instead. Excluding the same factors in the previous quarter would have meant the economy grew by 1.6 percent.

Consumers, who account for the biggest portion of the country’s economic activity, showed signs of strength, too. Personal consumption increased at a 2.2 percent rate, slightly faster than in the previous quarter. Investment in housing, factories and equipment also rebounded from a slack July-September period to a growth rate of 9.7 percent from October-December. That all squares with the quarter’s relatively robust employment data and suggests a modest U.S. recovery remains on track.

What’s more, real disposable personal income was particularly strong. The annualized increase of 6.8 percent was among the fastest rates of growth since before the crisis struck. By outpacing consumption, it helped elevate the savings rate, to 4.7 percent, even if the sharp end-of-year jump in dividend payouts to get ahead of tax hikes probably will cause this trajectory to reverse in the first three months of 2013.

The headline GDP figure may nevertheless have the power to reinforce the Federal Reserve’s bias toward low rates and $85 billion of monthly bond buying. That would be an unfortunate result given the underlying trends. The decline in public spending is unlikely to remain so sharp. And inventories are bound to start building anew. Most signs still point to at least a stabilizing economy, one that can sustain itself without so much of the central bank’s helping hand.

The U.S. economy unexpectedly contracted in the fourth quarter, suffering its first decline since the recession.

U.S. GDP declined at an annualized rate of 0.1 percent in real terms in the fourth quarter, the Bureau of Economic Analysis said on Jan. 30. Economists had expected a growth rate of 1.1 percent, according to Thomson Reuters.
A decline in government spending, primarily defense, curbed 1.3 percent of GDP growth. Inventory declines also subtracted 1.3 percent. Gross Private Product, a figure that excludes government spending, grew at 1.4 percent during the fourth quarter compared with 2.9 percent in the third quarter. Final sales of domestic product rose an annualized 1.1 percent.