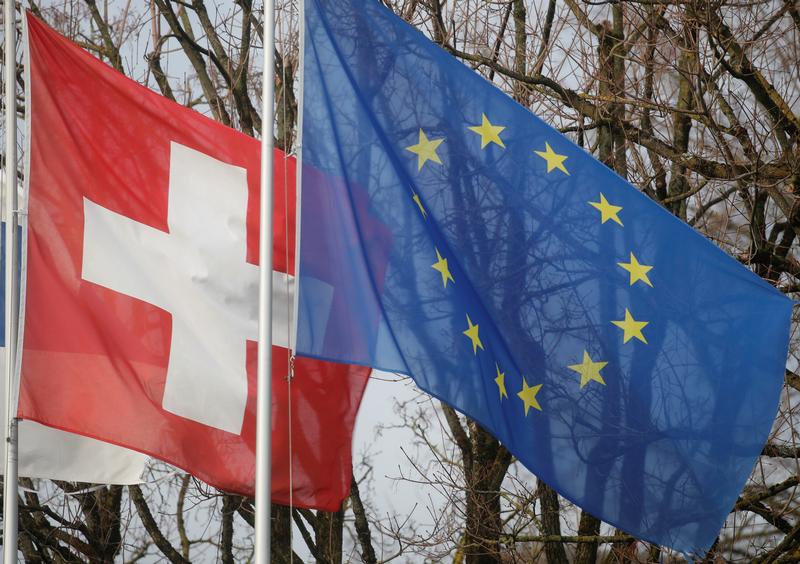 The Alpine nation reversed its opposition to EU immigration in a referendum, avoiding a messy standoff with its top export market. Broad economic concerns trumped popular angst. As negotiations with the United Kingdom intensify, the outcome will encourage Brussels to stand firm.

Switzerland's national flag flies beside the one of the European Union in Steinhausen, Switzerland February 11, 2020.

Swiss voters on Sept. 27 rejected a proposal by the right-wing Swiss People’s Party (SVP) to annul an existing agreement allowing the free movement of people between the European Union and Switzerland. Just 38% of votes cast were in favour of the proposal, with 62% opposing it.

The SVP, the biggest party in Switzerland’s parliament, had promoted the referendum because it wants the Alpine nation to take back control of immigration.

Support for the measure would have also ended six bilateral pacts between Switzerland and the EU that cover issues including air and land rights, technical standards and public procurement.

About 68% of the 2.1 million foreigners living in Switzerland are citizen of the EU, as well as of Iceland, Norway and Liechtenstein. More than 450,000 Swiss live in the EU.

The EU accounts for 53% of Swiss exports and about 71% of all imports, making it Switzerland’s biggest economic and trading partner, according to Swiss government data.