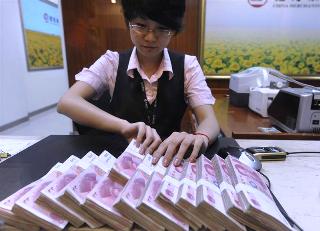 Bad loans are falling, capital buffers look healthy and earnings are shooting ahead – so why have China’s bank valuations fallen so far? Look deeper and there are signs that a slowing economy is hurting, potential problems lurk off the books, and small banks are struggling.

An employee counts Renminbi yuan banknotes at a bank in Hefei, Anhui province September 21, 2010. The People’s Republic of China last week set a series of new benchmarks in the booming offshore renminbi market as it priced a Rmb8bn (US$882m) sovereign bond in Hong Kong.

China’s biggest banks reported their first-half figures showing double-digit increases in earnings, and falling levels of bad debts, both relative to their total loans and in absolute terms.

Industrial and Commercial Bank of China, the biggest by assets, said net profit grew 29 percent year on year, with non-interest income such as fees and commissions rising 51 percent. ICBC’s average margin on its interest-bearing assets rose 15 basis points from the end of 2010, to 2.6 percent. Its balance of non-performing loans fell 5 percent from the end of 2010.

Bank of China reported net profit up 28 percent year on year, with its net interest margin increasing 7 basis points to 2.11 percent. Loans grew 9.8 percent over the six months, while deposits grew 7.5 percent. Non-performing loans were 1 percent of total loans, down from the previous six months, and also fell slightly in absolute terms to 62 billion yuan.

China Construction Bank’s earnings grew 31 percent year on year, with net fee and commission income up 42 percent. Its net interest margin increased from the end of 2010, to 2.7 percent from 2.4 percent. Non-performing loans fell from 1.1 percent to 1 percent as a ratio of total loans, and deposits slightly outpaced loans over the six months, growing 9 percent.

Agricultural Bank of China said earnings grew 45 percent year on year, while bad loans fell 0.36 percentage points, to 1.6 percent of total loans. AgBank, which listed in Hong Kong and Shanghai in 2010, had the highest allowance for bad loans of the big lenders, at 3.6 percent of its total lending, and its loan-to-deposit ratio was the lowest, at 55 percent.