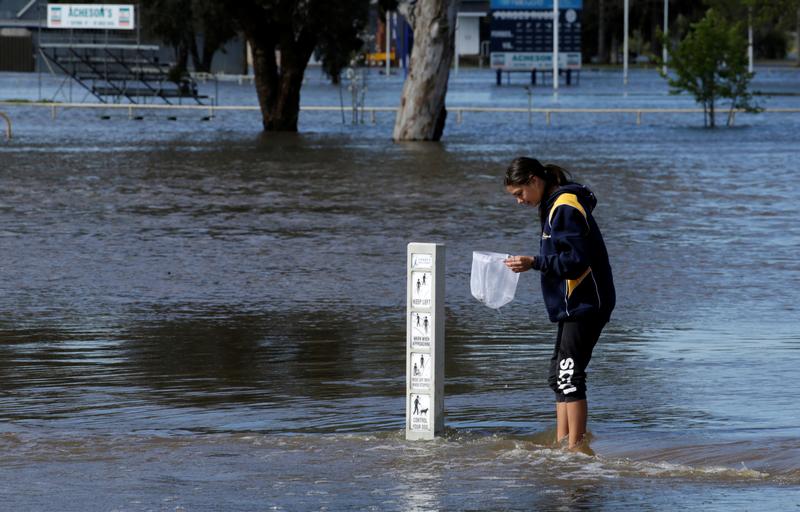 Silver Lake just closed a $15 bln fund, one of the largest ever. It will compete with SoftBank’s war chest, worth up to $100 bln. The private-equity shop knows its patch. But there are only so many SoFis, and fewer Dells. Too much capital plus too few deals equals disappointment.

Local resident Nadia Hartwig fishes with a net while standing on a flooded jogging path in the overflowing Forbes Lake after heavy rain created a declared natural disaster zone in the midwestern New South Wales town of Forbes, Australia, September 27, 2016.

Silver Lake said on April 18 it had raised $15 billion for a new fund focused on making technology-related investments. The fund, the fifth in the firm's series, brought the private-equity firm’s combined assets under management and committed capital to $39 billion. Silver Lake’s current portfolio includes Alibaba.com, Ancestry.com, Broadcom, Dell Technologies, GoDaddy, Motorola Solutions, Sabre, and SoFi, according to the firm.

SoftBank said in October the company would form a fund to invest an initial $25 billion in technology over the next five years. The potential size of the fund could reach $100 billion, the company said. Led by Masayoshi Son, SoftBank is partnering with Saudi Arabia’s Public Investment Fund. The Japanese company's current investments include an 83 percent stake in U.S. cellular company Sprint. It also invested in Alibaba in 2000. Last year it said it would sell a portion of that stake to reduce debt.

Vista Equity Partners recently raised a $10.6 billion private-equity fund to invest in technology deals, according to the Financial Times. It was Vista’s sixth fund.

Thoma Bravo closed Flagship Fund XII with $7.6 billion in September. The private-equity firm plans to use the fund to invest in technology and software companies.