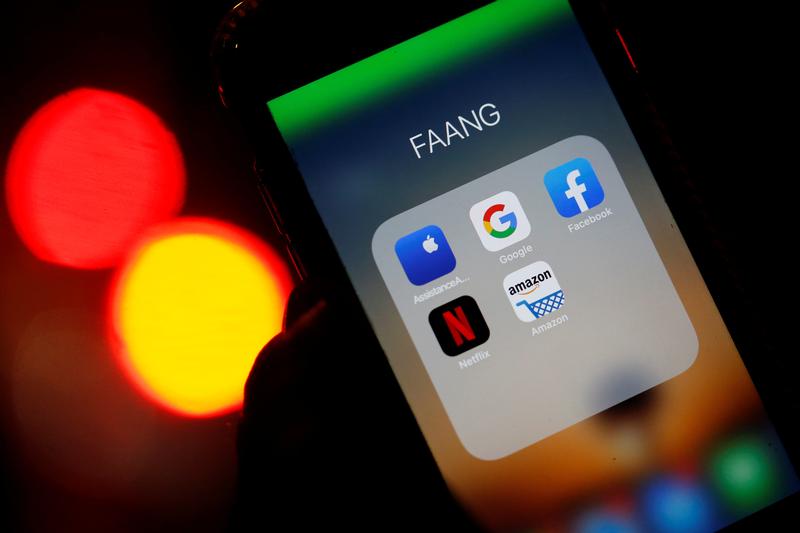 Tech’s lucky few are virtually detaching themselves from the economy. There’s no snazzy acronym to replace the so-called FAANG stocks – Facebook, Amazon.com, Apple, Netflix and Google – but since the coronavirus pandemic hit markets, some firms have seen their stocks blast off, while other former favorites have fallen behind. A focus on who’s most loved by consumers has given way to the question of who has the most robust revenue stream.

If equity markets’ performance this year looks detached from reality – the S&P 500 Index is down only 13% despite a plummeting economy – technology stocks are in general doing one better. Amazon, Netflix, and Shopify have seen their stocks rise roughly one-third or more. Microsoft has gained 11%. Apple, Alphabet, and Facebook, with a combined market capitalization just shy of $3 trillion, have seen their valuations remain almost unchanged, making them seem almost laggardly by comparison.

Whereas the FAANG phenomenon linked companies that were large, fast-growing and popular with consumers, there is now scope to be a bit more discerning. Companies based on serving ads to customers, like Mark Zuckerberg’s social network or Google’s parent Alphabet, are facing new problems as marketing budgets are cut, regardless of how much stuck-at-home users love them. Facebook’s revenue growth slowed at the end of the quarter, and Alphabet is cutting costs. Apple’s iPhone revenue dipped as shops that sell its handsets were forced to close.

What the winners have in common is steady revenue. Companies that have outperformed are in many cases those that lock customers into subscriptions, which provide a steady and growing stream of money. Canada’s Shopify helps retailers sell online, which is now an imperative for those who want to survive. Amazon and Microsoft also rent cloud services, a market that is both essential for the virtual economy and fast-growing. A Netflix subscription is easy to cancel in theory, but sticky in practice.

Of course, if the economy deteriorates enough, even tech’s chosen few will feel the effects of customers cutting subscriptions. But recent performance ought to be enough to get investors looking past catchy acronyms, and asking who’s got the most durable business model. That can’t be a bad thing.