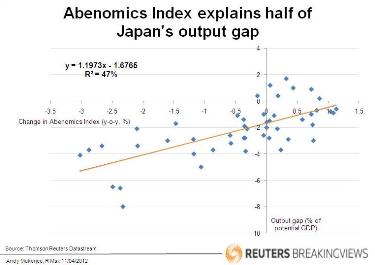 Shinzo Abe wants to stem the rot – and quickly. Less than four months into the job, Japan’s new prime minister has launched one of the world’s most ambitious programmes of fiscal and monetary easing. His goal is to defeat the scourge of deflation that has corroded the once-dynamic economy, shrinking it by 9 percent in 15 years. But is Abenomics having its desired effect?

Entrenched deflation won’t overnight give way to inflation. There is much else that needs to happen first: Wages and consumption will have to rise, demand for credit and new investments will have to grow, and expectations of future price gains will need to harden. Equity and bond investors will need to keep their faith.

Breakingviews has combined 10 such indicators of “animal spirits” into a composite Abenomics Index, which will be updated monthly. Users can customize the index by removing components they believe to be less useful.

How would the index have fared in the past? Over the last 12 years, the year-on-year change in the index has closely tracked Japan’s “output gap,” an official measure of whether actual output is above or below the economy’s potential, and by how much. Movements in the index can explain about half of the variation in the output gap.

So what’s the verdict on Abenomics so far? The early prognosis is encouraging. After rising for three straight months since Abe’s election, the index had a value of 94.6 in February. There is still much work ahead, though. For the economy to return to its pre-Lehman level, the index will need to reach about 96.  To recover the ground lost since early 2000, the index will need to hit triple digits.

That will be a hard slog if credit does not flow more freely. Junichiro Koizumi, prime minister between 2001 and 2006, did fix the nation’s broken banking system, but an incipient recovery in loan growth was cut short by the 2008 financial crisis. It’s only after the private sector feels more comfortable with leverage that Abe can shift gear and start cutting the government deficit. The index suggests the time for such belt-tightening is at least a few years away.