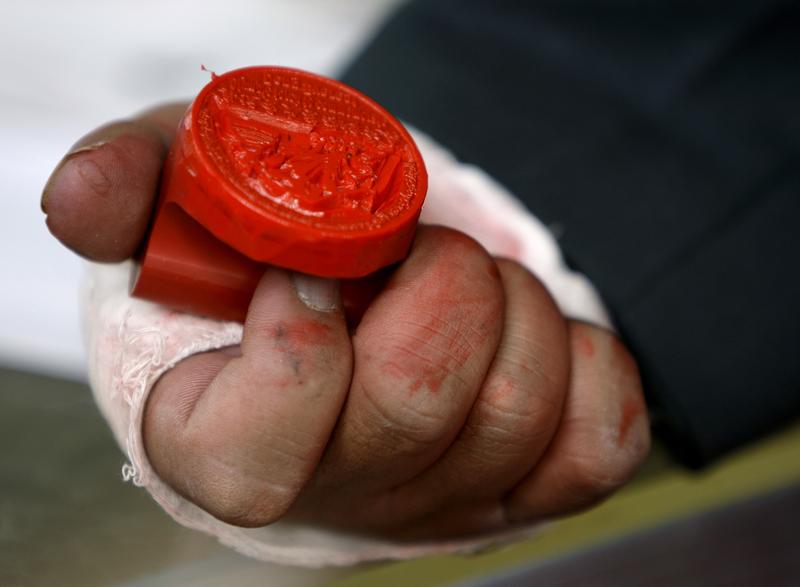 The Chinese video-games titan appears to have been taken by crooks pretending to work for Lao Gan Ma, a popular spicy condiment, using a forged company seal to ink an advertising deal. Such old-fashioned methods have embroiled others including SoftBank. Digitisation is overdue.

The postmaster of the world's highest post office holds the commemorative chop for the Olympic torch's ascent of Mount Everest, also known as Qomolangma, in the Tibet Autonomous Region May 8, 2008.

Tencent has sued Lao Gan Ma, maker of one of China’s best-known hot sauces, for unpaid advertising fees, according to a June 30 article in state-owned media Global Times, citing a Tencent statement it received. A Shenzhen court said it would freeze 16.2 million yuan ($2.3 million) in Lao Gan Ma assets over the dispute.

Lao Gan Ma, in a statement published on its microblog on the same day, denied signing any contract for advertising or engaging in any partnership with Tencent.

On July 1, police in the city of Guiyang, Lao Gan Ma’s headquarters, said three people pretending to be Lao Gan Ma marketing managers had forged the company’s seals and signed the contract with Tencent. Their aim was to obtain gaming activation codes that Tencent distributed alongside the advertisements, and resell them.