Turning up the volume 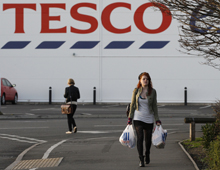 Shares in the food retailer are the FTSE 100’s worst performers this year. After a nasty warning in January, Tesco’s new-broom management team has outlined a plan for stabilisation. Lower UK margins are the necessary cost of faster growth. Investors should back the strategy.

A shopper leaves a Tesco store in Loughborough, central England.

Tesco outlined a refreshed strategy on April 18, promising to spend 1 billion pounds ($1.6 bln) on a revamp of stores in its UK home market. It will spend on refurbishing shops, on increasing staff levels, and on lowering prices.
Overall capital expenditure, however, is to be reduced from 3.8 bln pounds in 2011/12 to 3.3 bln pounds in 2012/13 as the company said its international business had matured to the point that they needed less investment.
Philip Clarke, the chief executive, said: “Whilst our International business is delivering excellent growth? we fully recognise that we need to raise our game in the UK.”
Annual results also published on April 18 showed that Tesco raised worldwide sales by 7.4 percent to 72 bln pounds and group profit before tax by 5.3 per cent to 3.8 bln. Tesco said the underlying profit before tax advance was a more modest 1.6 percent.
At 335 pence at 0800 GMT on April 18, shares were 18.6 percent lower than they were on Jan. 1. Clarke replaced Terry Leahy as chief executive of the food retailing company in March 2011.