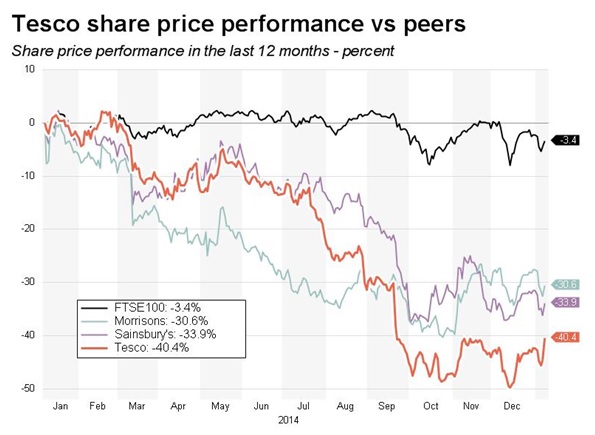 Britain’s top grocer will cut 1.35 bln stg of capex and head-office costs, ditch its dividend and close some stores. Price cuts will help it take on discounters. Yet there is still no chairman, no property revaluation, and no firm promise to retreat from Asia or Eastern Europe.

Tesco, the largest UK grocery retailer, saw a 2.7 percent decline in like-for-like sales excluding fuel in the 19 weeks to Jan. 3. The period covers Tesco’s third quarter, which runs to Nov. 22, and the following six weeks. The decline compared with a 4.8 percent drop in the previous quarter.

In Britain, Tesco’s biggest business, comparable ex-fuel sales fell 4.2 percent in the third quarter but only 0.3 percent in the six weeks to Jan. 3.

The company said on Jan. 8 it would cut annual capital expenditure from 2.1 billion pounds ($3.2 billion) to 1 billion pounds, halt plans to open 49 new stores and close 43 unprofitable shops. It will also shut its head office in Cheshunt, just north of London, moving its base to nearby Welwyn Garden City, as part of a programme to cut central overheads by 250 million pounds a year. It also said it would pay no final dividend.