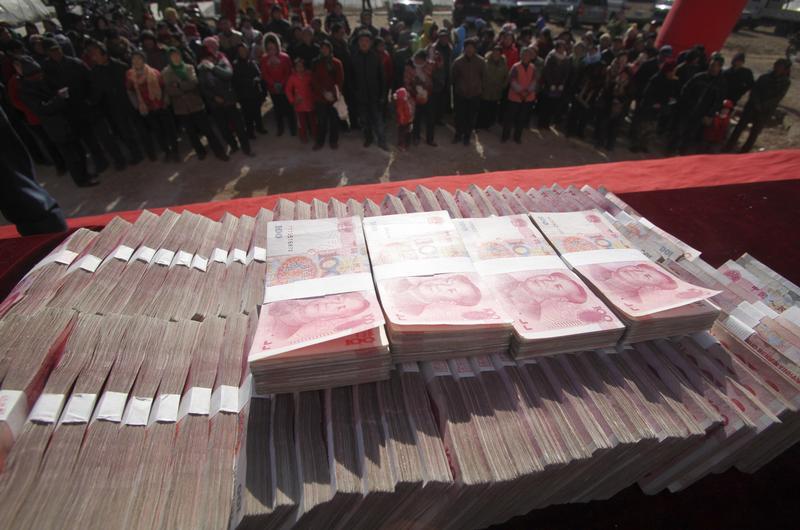 Debates over the fair value of the currency, which has slid 1 percent in a week, miss the point. What really matters is the trajectory that causes least financial and social damage. Halting the build-up of foreign exchange reserves is crucial. Appreciation looks the best course.

Tea leaf farmers gather to collect their share of the year-end bonus from a total amount of one million yuan ($165,272) handed out by a tea leaf company in a village of Jinan, Shandong province January 20, 2014.

China’s yuan opened weaker than the daily midpoint fixed by the central bank for the fifth consecutive trading day on March 3. By 0200 GMT the currency was trading at 6.119 against the dollar. The currency has slid 1 percent since the close of trading on Feb. 21.

The yuan is permitted to move 1 percent on either side of the daily midpoint, which is referenced to the U.S. dollar. The midpoint was last widened in April 2012.

The official Purchasing Managers’ Index reported on March 1 showed a slowdown in China’s manufacturing sector for February. The survey delivered a reading of 50.2, down from 50.5 in January, where a reading above 50 is considered to reflect expansion.

China’s foreign reserves, which the central bank mostly amasses by buying currency from banks on behalf of their clients at the prevailing exchange rate, were $3.8 trillion at the end of 2013, a $509 billion increase on the previous year.