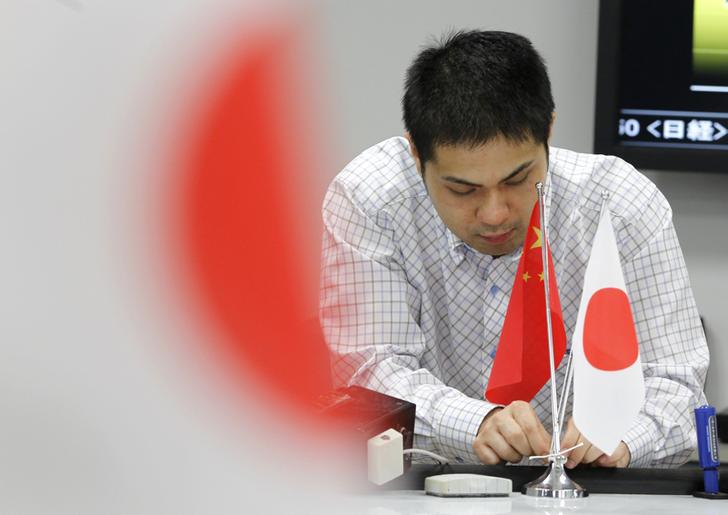 Is China condemned to suffer a Japanese “lost decade”? Its economy today has three big similarities with Japan in the late 1980s: High and rising debt, diminishing export competitiveness and an ageing society. China can avoid slipping into Japan’s deflationary hole, but only if it learns from Tokyo’s failure to cleanse its banking system.

The most striking similarity between Japan in the late 1980s and China today is the level of debt. In 1989, total private credit in Japan was about 200 percent of GDP. It is around the same proportion of the economy in China now.

Another important parallel that doesn’t get as much attention is a rising currency – and diminishing export competitiveness. This is as big an issue for China today as it was for Japan a quarter century ago.

Following the 1985 Plaza accord, the yen appreciated by 30 percent against its trading partners’ currencies in 15 months, after adjusting for inflation. Japan responded to the loss of foreign demand by running loose fiscal and monetary policies. Eventually, it lost control of credit growth.

China’s exchange rate has risen more gradually. Yet, after taking into account galloping wage costs, the yuan has strengthened by 47 percent against other major currencies since 2005. Japan’s current account surplus – the excess of domestic saving over investment – shrank by just 2 percentage points of GDP between 1985 and 1989. By comparison, the drop in China’s current account surplus since the financial crisis has been massive: from 10 percent of GDP in 2007 to just 2.5 percent in the past four quarters.

China’s response to the crisis and recession in the developed world has been increased borrowing, particularly by local governments and by companies. Last year, interest costs ate up a quarter of the operating profit of the median Chinese company with a market value of more than 1 billion yuan, according to a Breakingviews analysis of Starmine data. A decade earlier, the bill was only 14 percent.

Ageing workers also put a limit on growth. Japan’s old-age dependency, or the ratio of the elderly to those of working age, was 17 percent in 1989, and the figure doubled over the next two decades. In China, the ratio is currently lower at 12 percent. But Beijing’s one-child policy means the country will age at a faster rate.

What overwhelmed the Japanese economy, though, was property mania. Residential land prices in Tokyo tripled between 1985 and 1988 before collapsing. As much of the speculation had been financed by credit, the financial system froze. However, Japan allowed its banks to hide their problems until 2004, when Prime Minister Junichiro Koizumi finally cleaned them up.

China’s authorities are in a similar bind: the country’s local governments have borrowed anywhere between $2.4 trillion and $2.9 trillion, according to an estimate by the deputy head of the National Audit Office, largely by pledging increasingly valuable land as collateral. On the one hand, regulators are keen to rein in further speculation. On the other, deflating the bubble could have unpleasant consequences for the economy. The temptation will be to hide the debt, either in the banking system or in government-owned bad banks. But failing to write down dud loans could clog up the system and impede new investment and growth.

China has some advantages. For one, it is still developing, while Japan’s urbanization was largely complete by the 1980s. City-dwellers in modern jobs may be able to support more household debt than rural workers. Similarly, increasing labour productivity will boost growth and gradually make China’s debt less burdensome. China’s controls on domestic deposit rates and on international capital flows also reduce the chances of a short-term debt crisis. That gives the leadership some breathing room to sort out its problems.

Yet China’s relative lack of economic development can also be a handicap. The real purchasing power of average Chinese incomes is still only a third of what it was in Japan in 1990. After almost two lost decades, Japan is still prosperous. By contrast, a lost decade in China would be more agonizing – both for its citizens, and for the rest of the world.

A foreign exchange broker fixes a small pole with a Japanese flag and a Chinese flag at a trading room in Tokyo May 30, 2012.