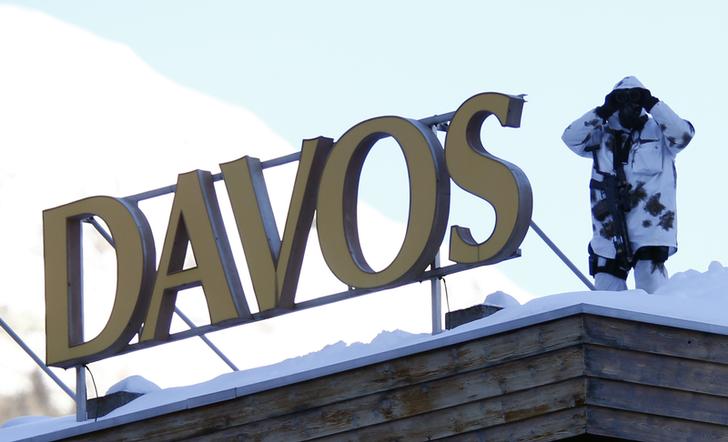 Spare a thought for the business and financial elite as they slide along the icy byways of the World Economic Forum in Davos. Life is undeniably picking up for them and it would be nice to say so. But the economic recovery has its winners and losers, and it looks bad to be a beneficiary at a conference whose overarching theme is “inclusive growth.”

Most of the chief executives, bankers and politicoes gathered at the WEF are, at best, only mildly optimistic in public. From panel to podium, many delegates acknowledge there’s more to cheer about than last year. A G2 comprising the United States and China is leading global growth. A slowdown in emerging markets – even the implosion of an Argentinian peso or Turkish lira – won’t change that.

On the sidelines, WEFers are much more positive. There’s talk of boosting productivity by making investments instead of opting for crude job cuts. January’s M&A boomlet could become self-perpetuating. In the words of one senior Wall Street banker, executives are “looking for validation of what the markets are telling them.” They are being told what they want to hear. Business hasn’t felt this good since before the crisis.

But to say openly that things are better than that would be unseemly. It takes the chutzpah of a Jamie Dimon, the outspoken chief of JPMorgan, to say “the moon, stars and sun may be aligned” for better times.

This year’s WEF has rightly preoccupied itself with the quality rather than the pace of the recovery. The image of out-of-work 20-something graduates in Madrid or Minneapolis haunt the forum. They are at risk of being seen as unemployable if they are out of the labour market for more than a couple of years. Quick fixes are elusive. As Eni Chairman Giuseppe Recchi remarked, it is “difficult for a company to hire a 30-year-old without work experience.”

One idea is for carefully designed, large-scale internship programmes. That, like many aspects of business behaviour that would support an inclusive recovery, involves short-term cost. Yet the investment community judges executives on short-term financial performance. PepsiCo chairman and CEO Indra Nooyi said in a session on “Doing Business the Right Way,” people may be forced to choose between “a pension return that’s high or a job.”

Sociological embarrassment isn’t the only cause of reticence. To call the turn exposes delegates to the possibility of having to eat the words when the next crisis blows. Lim Siong Guan, the president of the Government of Singapore Investment Corp, puts it bluntly: “They don’t want to declare it in case they are wrong.”

All of which explains why it may be safer to play up the risk that, say, this year’s European bank stress tests reveal some ugly truths that are too hard for the system to bear. Or that eurosceptics gain enough ground in forthcoming elections to disrupt European reforms. Or that Congress will gamble with U.S. creditworthiness in debt-ceiling negotiations. Or to dwell on Japanese Prime Minister Shinzo Abe’s warnings against increased Asian militarisation.

Davos Person has been lamenting the unfair state of the world at this exclusive forum. They can go home and enjoy an exclusive recovery.

The World Economic Forum in Davos, Switzerland ends on Jan. 25.

A Swiss special police officer patrols on a roof during the annual meeting of the World Economic Forum (WEF) in Davos January 22, 2014.

The World Economic Forum in Davos, Switzerland ends on Jan. 25.