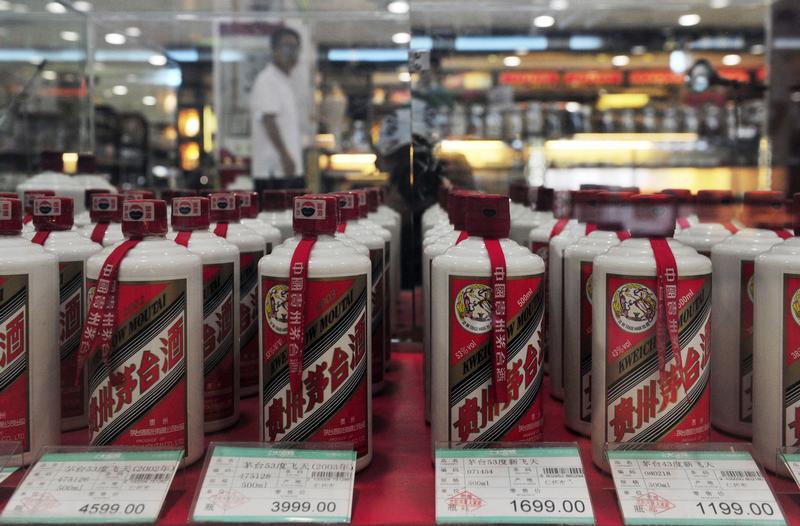 Kweichow Moutai’s market value has soared to a heady $70 bln, putting the liquor firm almost on par with Britain’s Diageo. Investors are toasting the baijiu distiller for riding out China’s anti-corruption drive. High valuations are offset by fast growth and fat margins.

A customer walks past a glass case displaying Maotai liquors with different price tags at a supermarket in Shenyang, Liaoning province August 8, 2012. The makers of China's fiery liquor baijiu, a pricey, potent drink that is a staple at state dinners, say it inspires poets and can even ward off dementia. For investors in the largest baijiu makers Kweichow Moutai Co Ltd and Wuliangye Yibin Co Ltd, the appeal is more mundane: the companies paid out huge dividends and raised earnings forecasts when a slowing economy had prompted dozens of Chinese firms to issue profit warnings. Picture taken August 8, 2012. REUTERS/Stringer

Shares in Chinese premium liquor-maker Kweichow Moutai have risen more than 50 percent in the past year. As of March 28, the Shanghai-listed company’s market capitalisation was $69.5 billion. That is close to the $72.9 billion valuation of Britain's Diageo.

The baijiu-maker said in February it expects first-quarter net profit to total 5.7 billion yuan ($828 million), up 15.9 percent from the same time last year.

Growth has slowed sharply in recent years, hit by an official crackdown on graft. Net profit grew just 1 percent in 2015, down from 52 percent in 2012. However, analysts expect net profit to grow 18.7 percent in 2017, Eikon data shows.

General Manager Li Baofang said recently that Kweichow Moutai could not keep up with soaring demand for its signature "Flying Fairy" drink, but would not compromise on quality to boost volumes, according to the company's website.