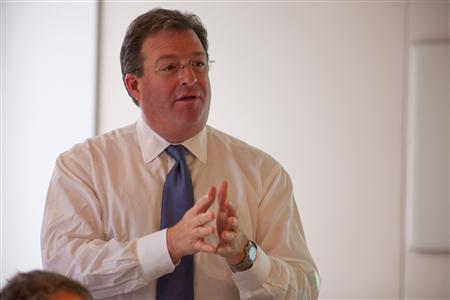 Thomson agreed to buy Reuters in May 2007. It didn’t really merge the two companies until just a few months ago. And now, with the resignation of Chief Executive Tom Glocer, the takeover is finally complete.

In truth, Glocer’s bankerly CEO profile no longer suits the publishing conglomerate – which owns Breakingviews. A lawyer by training, Glocer showed his rescue and restructuring abilities by pulling Reuters from the brink of bankruptcy about a decade ago. Then, he deftly engineered a deal to sell the 160-year-old British media organization to its Canadian rival just ahead of the credit crisis. Without Thomson’s steadier legal and tax divisions, Reuters might have struggled to survive independently hawking financial news and data to flailing banks.

For all his cost-cutting and deal-making skills, however, Glocer failed to exhibit a knack for the leadership task of creating obvious strategic growth. There have been some brighter periods. But Thomson Reuters shares have declined almost 40 percent since mid-2007 compared with a nearly 50 percent gain by those of rival Factset. Revenue growth from the Reuters side has lagged that of the Thomson legacy businesses. The controlling Thomson family grew weary of waiting. Four-and-a-half years later, it has fully executed the acquisition of Reuters and will try a different approach to expansion.

Glocer, 52, is the last prominent vestige of the vaunted news organization from the time the combination was unveiled. His long-time protégé, Devin Wenig, left earlier this year, following the disappointing launches of some costly new products and services. Reuters shares, once a hallmark of British investment portfolios, no longer trade in London. Much of the editorial leadership team has been replaced.

Yet it’s far from clear how the company under its newly appointed boss, Thomson veteran Jim Smith, plans to freshly take on rivals like Bloomberg. In September, when Smith became chief operating officer, the idea was to bring together the professional and markets divisions. Now, in conjunction with the news of the CEO change, Thomson Reuters is creating five business units. It may have been easier to tell that Glocer’s plans weren’t working than it will be to devise and implement ones that do.

Thomson Reuters said on Dec. 1 that Chief Executive Tom Glocer would retire at the end of the year and be replaced on Jan. 1 by Jim Smith, the chief operating officer since September.
The company simultaneously announced a new organizational and leadership structure with five business units: financial and risk, legal, intellectual property and science, tax and accounting and global growth organization.
Glocer joined Reuters in 1993 and became CEO in December 2000. He was the first American and the first non-journalist to lead the company. Canadian publisher Thomson agreed to buy Reuters in May 2007 and appointed Glocer as CEO of the combined company.