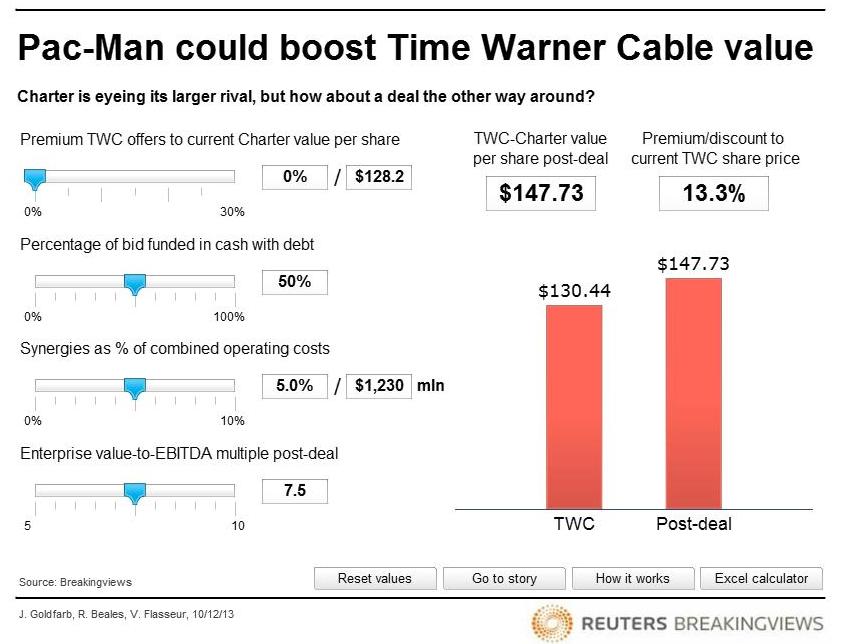 Time Warner Cable could play a little Pac-Man. Being acquired by smaller rival Charter Communications, a plan that has been doing the rounds, would create a highly indebted cable giant with an enterprise value of over $100 billion.

Turning the tables, though, would require less borrowing while keeping the biggest benefits. If nothing else, according to a Breakingviews calculator, the idea could point to a higher price for Time Warner Cable.

Charter is trying to line up some $25 billion in debt to finance a presumed cash and stock bid. Adding that to the existing $38 billion of net debt already carried by the two companies would result in a combined entity with leverage of more than 5.5 times combined earnings before interest, taxes, depreciation and amortization, before factoring in any cost savings. By comparison, rival Comcast’s debt multiple is closer to two times EBITDA.

With Charter as the seller instead, however, less debt would be needed. Since the shares of both companies have already surged by 42 percent – nearly triple the increase in the S&P 500 Index – since March when cable magnate John Malone bought a minority stake in Charter and kicked off talk of consolidation, assume Time Warner Cable pays the going rate of about $128 for each Charter share, as of the market close on Monday. If it borrowed half of the $13.2 billion purchase price and paid the rest in shares, the combined company would wind up with debt of around four times EBITDA.

If a merged Time Warner Charter Cable could cut its total programming costs and other expenses by 5 percent, or $1.2 billion, the new company’s annual pro forma EBITDA would be about $12.5 billion. Assume the enterprise value is 7.5 times EBITDA and TWCC’s shares could be worth nearly $148 each, after adjusting for debt and the new share count.

Right now, Time Warner Cable stock trades at around $132. The risks involved in achieving the cost savings, the so-called “social” issues over who would run the company and Malone’s presence mean that a full-blown Pac-Man defense might not be particularly tempting compared with a sale. Even so, the exercise suggests what Time Warner Cable could achieve if it did utilize the tactic – and what Charter may ultimately need to pay to buy its larger competitor.

Rob Marcus, the incoming chief executive of Time Warner Cable, said on Dec. 9 he is not in a hurry to sell the company.

Marcus, the company’s chief operating officer who will take over as CEO on Jan. 1, said at an investment conference: “Whether or not Time Warner Cable will participate in M&A is and always has been, whether as a buyer or seller, 100 percent driven by what’s in the best interest of shareholders.”

Rival Charter Communications is in the process of arranging about $25 billion in debt to help finance an acquisition of Time Warner Cable, the Wall Street Journal reported on Nov. 27, citing people familiar with the matter. The debt would support an offer that includes almost $90 a share in cash, according to the report.