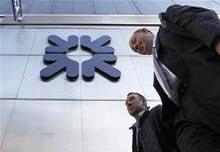 Britain shouldn’t obsess about losing money on its Royal Bank of Scotland stake. Chancellor George Osborne is about to get cracking on reducing the government’s 79 percent holding, which will in the short term crystallise a loss on the 46 billion pounds handed over by taxpayers in 2008 and 2009. That hit needs to be put into perspective.

Were the UK government to sell the entirety of its stake at RBS’s 342 pence share price at the close of July 31, it would lose about 14 billion pounds, based on the gap between that and the 500 pence average in-price. That’s not great when Osborne is simultaneously trumpeting the need for further austerity. But factor in fees already paid by RBS to the state in return for insurance on its stinky assets between 2009 and 2012 and various other support measures, and the in-price is more like 430p, cutting the potential loss in half.

Besides, this isn’t a particularly helpful way to think about the government’s actions in 2008. If RBS hadn’t been bailed out, the UK economy would have contracted by even more than the 7.2 percent it did. Questions of “value” are therefore a little fuzzy.

If Osborne is still worried about in-prices, he could choose to trickle RBS shares out to institutional investors a little at a time, as he is doing with the government’s 14 percent stake in Lloyds Banking Group. But he could equally go a bit faster.

There is a parallel in RBS’s own deleveraging programme: in early 2014, it took provisions covering notional losses of 15 percent on 33.5 billion pounds of assets it no longer wanted. Thus far, it has sold at tighter discounts – since its initial estimate, it has released 1.6 billion pounds in provisions, helped by central bank quantitative easing that has kept asset prices high.

The same factors could mean it’s better to sell equity stakes now rather than wait. But even if QE is unwound, RBS would still gain from being a non-state-owned institution. Investors rightly mark down institutions that are subject to political interference, which RBS has been for years. Addressing that could push up the price – and further reduce the UK government’s exit wounds.

Paragraph 2 of this article has been updated to correct 43p to 430p.

The UK government could begin the selldown of its Royal Bank of Scotland stake as soon as Aug. 3, the BBC reported on Aug. 2.

RBS reported an increase in second-quarter earnings on July 30, but said it would be unable to return capital to shareholders until at least the first quarter of 2017. Net profit was 293 million pounds, 27 percent higher than the same quarter a year earlier.

An initial sale to financial institutions, which will be at a loss on the average 502p per share price the government originally paid, is possible in the next few days, but more likely in September, sources familiar with government thinking said.