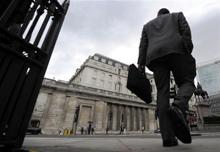 Has the too big to fail problem been licked? The Bank of England and Federal Deposit Insurance Corp sound pretty confident, declaring this week they’re nearly in a position to resolve a systemic failure without inflicting losses on taxpayers. It’s hard to know without a test case. But the signal from capital markets suggests watchdogs may be on to something.

Though the wider public may still think big swinging bankers will get bailed out in a crisis, investors in U.S. bank debt are taking no chances. In fact, the nation’s biggest financial institutions are paying more to fund their loan books on a relative basis in the credit default swaps market than are similarly rated industrial companies. More importantly, it costs them more than their smaller rivals.

The top six U.S. banks and brokers, those with balance sheets larger than $750 billion, recently paid an average premium on their unsecured five-year debt of about 129 basis points above the risk-free rate, according to Credit Suisse’s Liquid US Corporate Index. Furthermore, the biggest banks paid more than the average of 15 regional and trust banks also analysed by Credit Suisse. Funding for these smaller institutions cost 12 basis points less in the markets.

The implication is that despite their size and that some of these banks were rescued in the 2008 panic, investors consider holding their debt a riskier proposition. That bolsters claims by regulators that new rules giving them the authority to shutter failing banks are sinking in.

True, the bank deposit market may reflect lingering doubts. FDIC data show that since the crisis, banks with over $10 billion of assets pay less to depositors than smaller ones. In the second quarter, they paid 20 basis points less. This could be down to more extensive branch and ATM networks, higher marketing spending and a greater array of products than any conscious decision by customers to keep savings in the vaults of institutions perceived as infallible.

Until a major, failing bank is wound down by a government at the expense of bondholders as well as shareholders the verdict will be undecided on the fate of too big to fail. It’s encouraging, however, to see investors finally recognising the possibility.

A man walks past the Bank of England, in the City of London June 15 2012. REUTERS/Paul Hackett

The Bank of England and the U.S. Federal Deposit Insurance Corp said in a joint paper released on Dec. 10 that each country’s plans for dealing with the types of cataclysmic financial failures that marked the 2007-2009 financial crisis would reduce risks to financial stability.
“The FDIC and the Bank of England have developed resolution strategies that take control of the failed company at the top of the group, impose losses on shareholders and unsecured creditors - not on taxpayers - and remove top management and hold them accountable for their action,” they said in the paper.
The new authorities to seize and resolve so-called global systemically important financial institutions came in the United States from the 2010 Dodd-Frank financial reform law, and in Britain from the anticipated approval by early 2013 of the European Union Recovery and Resolution Directive.