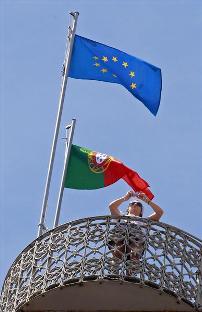 Portugal got a thumbs-up from lenders, but uncertainty over the outlook persists as it stumbles to the end of its programme. Investors are still antsy, growth is elusive and austerity has reached its limits. The country could yet turn into the euro zone’s biggest drag.

Portugal’s international lenders approved the country’s performance under a bailout in their latest review on Oct. 3, but rejected government requests to ease fiscal goals.
“The programme remains broadly on track, with the authorities determined to achieve its objectives,” the lenders said in a statement.
The government and creditors raised next year’s growth forecast to 0.8 percent from 0.6 percent and now expect GDP to contract by 1.8 percent in 2013 compared with the previous estimate of a 2.3 percent decline.
Portugal’s ruling Social Democrats (PSD) took a heavy beating in local elections on Sept. 29, winning 26.5 percent of the vote. The Socialists, the main opposition party, won 36.4 percent of the vote.