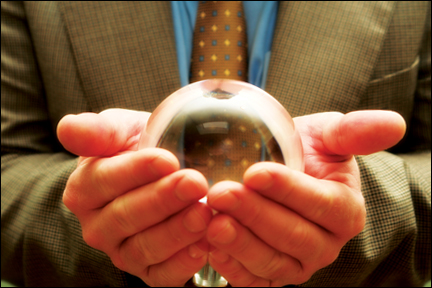 A year from now, U.S. presidential hopeful Hillary Clinton will snag a plum new job. Marissa Mayer may be free to help her after she is ousted as Yahoo chief executive. Taxi app Uber’s valuation will stall, but the wider tech industry will race ahead. Or so readers of Reuters Breakingviews seem to think.

The first informal Breakingviews reader poll suggests the global financial elite are hunkering down for a tough year. Oil will stay below $50 a barrel, according to almost half of the near-500 respondents. More than one-third said they expect China’s GDP to grow at less than 4 percent. And half think it’s time to worry “intensely” about Islamic State militants.

Where is safe? Maybe not the corner office. Yahoo’s Mayer was the top pick of CEOs likely to be out of a job by the end of 2016. Volkswagen chief Matthias Mueller came in second, garnering a 39 percent no-confidence vote. It’s a good year, though, to be General Electric boss Jeff Immelt, who fewer than 8 percent think may not see out the year. Not surprisingly, GE has delivered a total shareholder return of 29 percent in the past year, while Yahoo’s is a dismal negative 33 percent, according to Eikon data.

There will be new winners. The United States will get its first female president, says the majority. Global energy stocks will reverse a 25 percent fall over 2015 to be the second most attractive sector in 2016, after tech. Yet among those private companies worth over $1 billion known as unicorns, the biggest American of the bunch, Uber, will shed the most value, followed by Snapchat, readers say.

The most curious thing about Breakingviews readers is the suggestion that it’s not what they read but how. Readers who get their views through Twitter were more likely to see sub-$50 oil, and sub-4 percent Chinese growth. They favoured property over stocks and were more likely to see Republican gaffe-bot Donald Trump romping into the White House. Social media may have made the world more informed, but it hasn’t made it any happier.

Breakingviews asked readers to answer 10 questions, selecting from a range of options. The questions and top answers are below. The full survey results, including the tenth question – “What’s your big financial prediction for 2016?” – can be found here

You can only invest in one asset next year. Which is it?
Stocks – 31 percent
Property – 25 percent

Who will be the next president of the United States?
Hillary Clinton (Dem) – 58 percent
Donald Trump (Rep) – 18 percent

Which of these CEOs will be out of a job a year from now?
Marissa Mayer (Yahoo) – 60 percent
Matthias Mueller (VW) – 39 percent

This view is a Breakingviews prediction for 2015. Click here to see more predictions