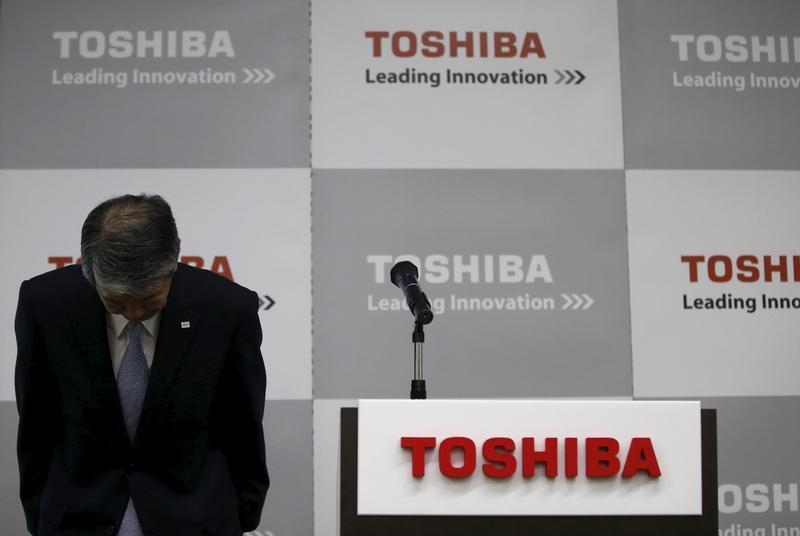 Toshiba’s top-level overhaul is a setback in an otherwise solid clean-up. On May 6, the scandal-hit group named two new bosses, neither ideal. The rejig is a sharp reminder of the continuing weaknesses in Japan’s culture of corporate governance.

New Chief Executive Satoshi Tsunakawa distinguished himself building up Toshiba’s medical unit, which was both successful and untainted by a $1.3 billion accounting scandal that emerged last year. Those are big pluses. But Toshiba has just sold out of healthcare. Bringing in an outsider with more expertise in the remaining core businesses of energy, infrastructure or memory might have made more sense.

Incoming Chairman Shigenori Shiga is also problematic. He chaired Westinghouse Electric while the U.S. nuclear unit booked writedowns worth $1.3 billion – charges that Toshiba did not flag at the time, in violation of Tokyo disclosure rules. More generally, an outsider is more likely to provide a robust challenge to management. But while this is best practice in some other markets, Japan’s newly beefed-up corporate governance code does not push companies to go this far.

Furthermore, outgoing CEO Masashi Muromachi will remain an adviser. It could be argued that a company in wrenching transition benefits from extra continuity. But the principle is not a good one. After all, the continuing presence of former bosses helped get Toshiba into its current mess. Such “ghosts in the boardroom”, as reform advocate Nicholas Benes dubs them, make it harder for Japanese companies to change course decisively.

It is a shame because crisis has otherwise sparked real change at Toshiba. It has slimmed down the board and ensured that outside directors now dominate. A sale of the medical unit, for a punchy $5.9 billion to Canon in March, helped shore up a wobbly balance sheet before the close of its financial year. Other sell-offs, notably in white goods, also sharpen the conglomerate’s focus.

But big headaches remain, including what to do about a huge exposure to liquefied natural gas. Fluffing the leadership overhaul now is unhelpful.

Toshiba of Japan said on May 6 it had nominated Satoshi Tsunakawa, a former head of its medical equipment division, to be its next chief executive officer.

Sixty-year-old Tsunakawa, who was not embroiled in an accounting scandal that emerged last year at the company, is credited with having grown the medical equipment unit into a major profit driver. He is currently a senior executive vice president at Toshiba.

“My biggest task would be to rebuild trust from stakeholders and transform the company under our new action plans,” Tsunakawa told a press conference. “I would place the most immediate priority on beefing up the capital base.”

A $1.3 billion book-keeping scandal last year has pushed Toshiba to streamline its businesses, announce plans for 14,000 job cuts and the sale of the medical unit to Canon for $5.9 billion.