Last in, first out 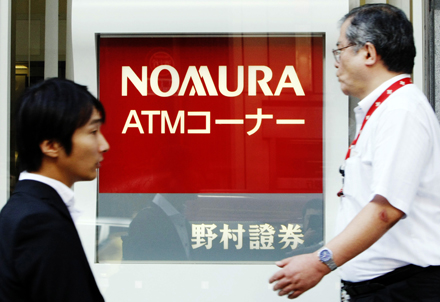 Western banks in Japan often complain that Nomura’s long-term dominance means they can’t get a look in. It turns out that works both ways. Tough markets have hit Nomura’s operations in the United States and Europe harder than most, driving the Japanese group to a $589 million loss in the third quarter. With far bigger rivals also set on shrinking, it is hard to see how Nomura’s global ambitions will survive.

On the face of it, Nomura did no worse than the herd. Fees from the advisory business fell 40 percent compared with the previous quarter. Equity trading fell by the same amount, and fixed income fared slightly better with a 32 percent decline. But Japan, where Nomura still rules the roost, flattered the numbers. Strip that out, and the wholesale bank’s revenue fell 62 percent. Deduct the gain on Nomura’s own debt, and its overall loss widens to $741 million.

Nomura has some factors in its favour relative to bigger peers. It lacks the rogue trading problems of UBS, the U.S. retail challenges of Bank of America, and French banks’ exposure to euro zone periphery debt. Thanks to being Japanese, its cost of funding is still relatively low. Moreover, the domestic stronghold should get stronger as Japan moves on from March’s earthquake.

But that is where the optimism ends. Whereas the likes of Credit Suisse and UBS are cutting visible fat, Nomura was already underweight. Consider a back-of-envelope example. The two Swiss banks are cutting 3,500 jobs each to save around $2.5 billion. If Nomura, which hopes to save half as much, cut half the number of jobs, that would equate to 13 percent of its non-Japanese workforce.

The soul-searching is likely to become more urgent as tough markets persist. A sub-scale investment bank will struggle to pull in the best talent, and Nomura is unlikely to get bigger if overall capacity in the industry is due for a crunch. Financially, the case is no more compelling. Even if Nomura had already delivered those $1.2 billion of cost cuts, its annualised return on equity would be just 8 percent. That’s not enough to justify hanging on come what may.

Men walk past a Nomura Securities branch in Tokyo.

Nomura Holdings reported a 46 billion yen ($589 million) net loss for the three months ending Sept. 30, its worst result since the first quarter of 2009. Earnings were hit by a fall in trading profit, and lower retail commissions in the financial group’s core Japanese brokerage business.
Nomura said it would cut costs by $1.2 billion, or 94 billion yen, a third of which were announced in the previous quarter. Around 60 percent of the total cuts would fall in Europe, according to a person familiar with the situation. Around 70 percent of the costs would come from headcount reductions.
Revenue from wholesale banking, which includes the investment banking business, fell 44 percent quarter on quarter, to 79 billion yen. The contribution from Japan increased slightly to 41 billion yen, with a 71 percent fall in European revenue, a 63 percent fall in Asia excluding Japan and 53 percent fall in the Americas.
Nomura’s income included an 11.8 billion yen accounting gain from changes to the value of the company’s own debt.
Nomura’s shares fell 3 percent on Nov. 1 to 294 yen. The stock was trading at its lowest level since 1984, the earliest date for which Thomson Reuters share data is available.