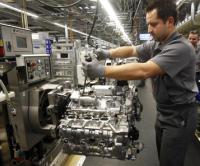 The latest German export figures are a disappointment, with sales to the euro zone sharply down. But sales to emerging markets have quintupled in the past decade and will continue to power the German economy – and make the global one more balanced and healthier.

A worker assembles and engine for the Porsche 911 at a factory in Stuttgart, Germany (Reuters)

German export earnings fell by 3.4 percent from October to November, according to the Federal Statistics Office. By comparison with a year earlier, export earnings were flat. Exports to the euro area were down in November by 5.7 percent on November 2011, while exports outside the EU rose by 5.6 percent. For the January to November period, exports to the euro zone declined by 1.7 percent on a year earlier while those to the entire EU rose by 0.2 percent and exports to countries outside the EU rose by 10.4 percent.