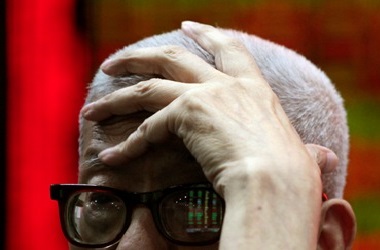 Hints of monetary easing in the euro zone and the chance of a tightening in the United States have been unkind to the euro. The currency has shed 4 percent against the dollar in a week, most lately after U.S. Federal Reserve Chair Janet Yellen signalled on Oct. 28 that a December interest rate hike was a possibility. Yet traders aren’t buying the idea that a real rout is coming.

The easiest way to see this is to compare moves in the euro-dollar exchange rate with those in the options market. The euro’s drop after European Central Bank chief Mario Draghi on Oct. 22 raised the possibility of looser monetary policy coincided with a rise in investors’ preference for put options to sell the currency rather than call options to buy it. That is consistent with an expectation that the euro will fall further. By Oct. 26, this predilection was at its most marked since July.

But something curious has happened since. While the euro has extended its losses against the dollar, the preference for puts has gradually returned to pre-Draghi levels for one-month options. It seems as if investors have started to doubt whether the euro will keep falling at its recent pace.

There are a couple of good reasons for this. First, the Fed’s December decision is likely to depend on how the U.S. economy performs between now and then. This leaves the dollar in the thrall of American data, and far from guaranteed to move in one direction. By contrast, Draghi has made the euro less sensitive to the day-to-day newsflow by making looser monetary policy sound more like a done deal.

Second, Draghi’s bark may be worse than his bite. The euro weakened more after the ECB first announced it would buy government bonds than it did once the purchases actually began. Investors may be wondering if the same thing could happen again.

Third, traders still bear the scars of the euro’s somewhat capricious behaviour over the course of the past six months. Too often, the currency has risen when there has been bad economic news and fallen when the tidings have been good. It’s all enough to make even the bravest euro bear a trifle wary.

The euro fell as low as $1.0894 on Oct. 28, its weakest since Aug. 7 and down 4 percent from a week earlier. Its latest losses against a broadly stronger dollar came after the U.S. Federal Reserve left the door open for an interest rate rise in December in a statement issued after its latest policy meeting.

The euro fell as low as $1.0894 on Oct. 28, its weakest since Aug. 7 and down 4 percent from a week earlier. Its latest losses against a broadly stronger dollar came after the U.S. Federal Reserve left the door open for an interest rate rise in December in a statement issued after its latest policy meeting.