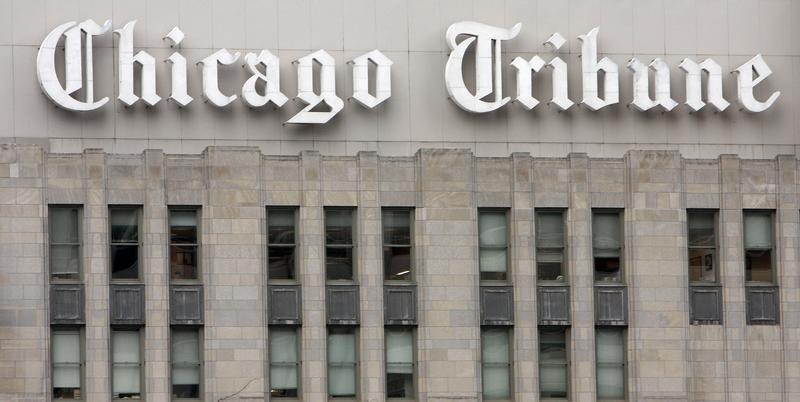 Tribune Publishing’s latest takeover defense makes for a good headline but may just be disappointing clickbait. Chairman Michael Ferro is drawing up plans to turn the tables on unwanted suitor Gannett, according to Politico. The maneuver probably would require Tribune to lard itself with immense debt, which is what made the company vulnerable in the first place.

As it stands, the owner of USA Today and other newspapers has offered to buy Tribune for $490 million in cash, a 99 percent premium to the undisturbed price. The valuation is also superior to where most of its publicly listed peers trade.

For Tribune to enlist the so-called Pac-Man defense and gobble up its larger rival instead would be considerably pricier. Assume an all-cash bid without any outside backers at a more standard premium of 30 percent to where Gannett’s shares now trade, and the equity would cost some $2.4 billion. Subtract $200 million of cash on Gannett’s balance sheet and factor in Tribune’s existing $390 million of debt, and the combined company would have net borrowing of some $2.6 billion.

By 2017, Gannett is expected by analysts to generate about $420 million of EBITDA and Tribune almost $140 million. Gannett sees $50 million of cost savings by merging the operations. Add it all up and total EBITDA could reach $610 million. Net debt would be more than four times that figure.

In a shrinking business, that would be a worrisome level for credit-rating agencies and shareholders alike. An aversion to debt is a big reason Gannett spun off from the company’s broadcasting arm last year with net cash.

Tribune also has its own tortured history with debt. When real-estate mogul Sam Zell bought the Chicago-based publisher in 2007, the $13 billion of leverage he burdened the then broader business with led to bankruptcy within a year. Tribune’s second-largest owner after Ferro endured four years of the process as one of its senior creditors.

The fanciful M&A tactic the chairman is reportedly contemplating reflects just how much he relishes his role as a newspaper owner. Gannett disclosed on Friday that when its executives met with him last week, Ferro said he was unwilling to engage in deal talks unless he gets “a piece of the action.” With his Pac-Man plan, it’s not clear anyone else would want any.

Michael Ferro, the chairman of Tribune Publishing and its largest shareholder, said he is working on a bid to take over Gannett, according to a May 19 report in Politico, citing an unnamed source. “I have lawyers working on it,” he told staffers at the Los Angeles Times.

Gannett on May 16 sweetened its offer to buy Tribune to $15 a share in cash, a 99 percent premium to the undisturbed share price on April 22 before Gannett went public with its approach. The total value of the deal, including debt, is $864 million.

Oaktree Capital, Tribune’s second largest shareholder, sent a letter to the board on May 18 urging directors to engage with Gannett immediately.