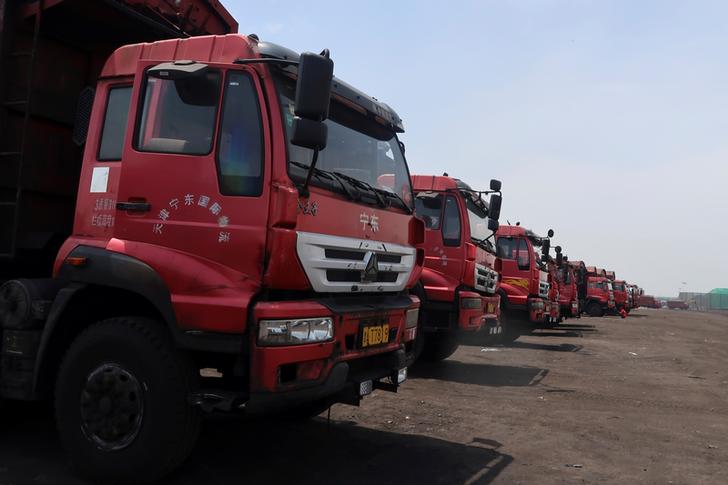 Manbang, which matches those shipping goods with independent truck drivers, was created by a 2017 merger between two rivals. Chief Executive Peter Hui Zhang ran one of them, while former Chairman Wang Gang was an early investor in China’s Uber equivalent Didi. Between then they helped attract nearly $5 billion from investors including Tencent and Fidelity.

The company boasted nearly 3 million truckers and over 1 million shippers as of last year, having lured many of them to its app by providing listing and matching services at almost no cost. It now charges membership fees and commissions, pockets the difference on orders it brokers, and offers insurance and loans. Moreover, it’s a fast-expanding sector, with the gross value of digital transactions set to grow at a compound annual rate of almost 60% to 2025, according to consultancy CIC.

Turning a profit, though, is hard. The $27 billion of business booked through Manbang’s app in 2020 unloaded just $43 million in profit, after stripping out stock-based compensation. The pandemic didn’t help, limiting revenue growth to just 4%. But that top line, at $396 million, implies a take rate of just 1.5%; Uber’s was 22%.

Regulations are taking a toll, too. Price subsidies and exclusive contracts are frowned upon, and labour protections have become a policy priority. In April the Ministry of Transport hauled in Manbang and ordered it to correct unreasonable pricing and unfair operating rules as “a majority of truck drivers” expressed strong discontent.

Meanwhile, competition is growing. Rival ForU, which filed for a U.S. IPO earlier last month, reported higher 2020 revenue than Manbang and slightly quicker growth, though remained in the red. Boss Shan Dandan wants ForU to be involved in every step of the transaction, which should bolster the bottom line. Manbang is also set to run into Huolala and Kuaigou Dache as it pivots aggressively to the intra-city freight market.

Full Truck Alliance, also known as Manbang, on May 28 filed to go public on the New York Stock Exchange. It plans to raise about $1.5 billion at a valuation of $20 billion, Reuters reported citing unnamed sources.

SoftBank owns 22.2% of the company and Sequoia Capital China owns 7.2%.

Trucks are parked on the premises of the Ning Dong logistics company in the port of Tianjin, China May 8, 2017. Picture taken May 8, 2017.

Full Truck Alliance, also known as Manbang, on May 28 filed to go public on the New York Stock Exchange. It plans to raise about $1.5 billion at a valuation of $20 billion, Reuters reported citing unnamed sources.

SoftBank owns 22.2% of the company and Sequoia Capital China owns 7.2%.