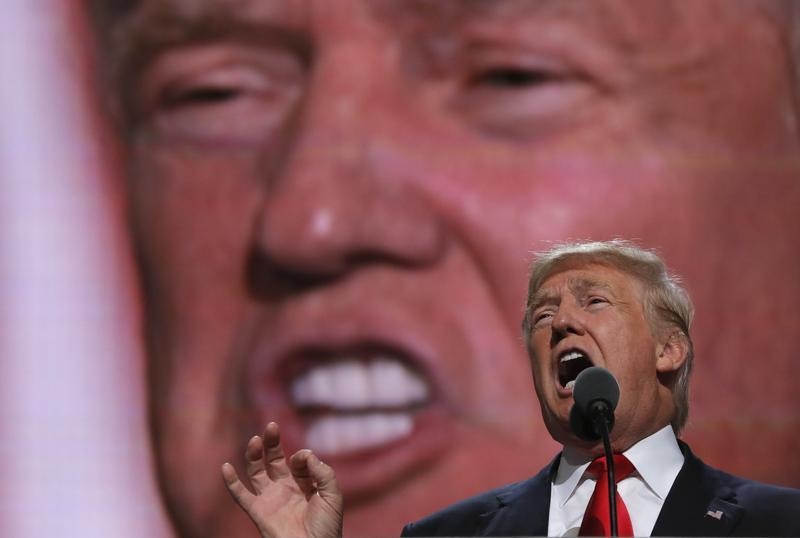 Donald Trump’s fear mongering could strike a chord with American voters. The White House hopeful was officially anointed at the Republican National Convention in Cleveland on Thursday night. He and other speakers, like technology investor Peter Thiel, presented a dire picture of the world. At a moment when the public is focused on violence at home and abroad, the strong appeal of law and order may overshadow all else.

The New York businessman’s gloomy portrait of the U.S. economy depends on a selective use of the facts. The recovery since the 2008 financial crisis has been slow but sustained, and the unemployment rate has been cut in half since the 10 percent peak in late 2009. Trump said 58 percent of African-American youth are jobless. According to the Labor Department, the unemployment rate for blacks ages 16 to 19 is 31 percent. Nonetheless, Trump’s message has resonated with blue-collar workers who feel they have not benefited from globalization.

Perhaps because of this mixed economic picture, Trump focused on security. In June, 49 people were killed in a shooting at a gay night club in Orlando, Florida – a massacre that evinced a rare shout-out from a Republican candidate for the LGBTQ community. Seventy-one percent of Americans think a terrorist attack could take place in the near future, the highest level since 2003, according to a June CNN-ORC poll.

Trump vigorously played on those fears. He talked about the recent murders of police officers and described “men, women and children” being “viciously mowed down” by a truck in Nice. “The crime and violence that today afflicts our nation will soon come to an end,” he promised. “Beginning on January 20th 2017, safety will be restored.” According to the FBI, violent crime was up 1.7 percent in 2015 compared to 2014.

Thiel provided a warm-up for Trump’s vision, calling the government “broken.” The early investor in Facebook and billionaire founder of PayPal said: “Our nuclear bases still use floppy disks. We don’t accept such incompetence in Silicon Valley, and we must not accept it from our government.”

Trump trails only slightly behind his Democratic Party rival Hillary Clinton in key swing states like Ohio, despite her backers spending more than $20 million on television ads in June. Trump has already made headway with his populism. If his message polls strongly, any chances of an election based on recharging economic growth will be greatly diminished.

Donald Trump officially accepted the Republican Party's presidential nomination on July 21 during the GOP convention in Cleveland. In a speech to supporters, Trump outlined promises on fighting crime, reining in illegal immigration and improving the economy.

He pitched himself as the candidate who can keep the country safe from domestic and foreign threats. "Nearly 180,000 illegal immigrants with criminal records, ordered deported from our country, are tonight roaming free to threaten peaceful citizens," he said.

Trump also said he would simplify the tax code, roll back regulations and scrap or negotiate trade deals, which he said have hurt American workers. "I have made billions of dollars in business making deals – now I'm going to make our country rich again," Trump said.

Silicon Valley investor Peter Thiel spoke earlier during the convention and described the U.S. government as "broken." "Our nuclear bases still use floppy disks," Thiel said. "Our newest fighter jets can't even fly in the rain. We don't accept such incompetence in Silicon Valley, and we must not accept it from our government."

The Democratic convention kicks off on July 25 and former secretary of state Hillary Clinton will accept the party's nomination on July 28.