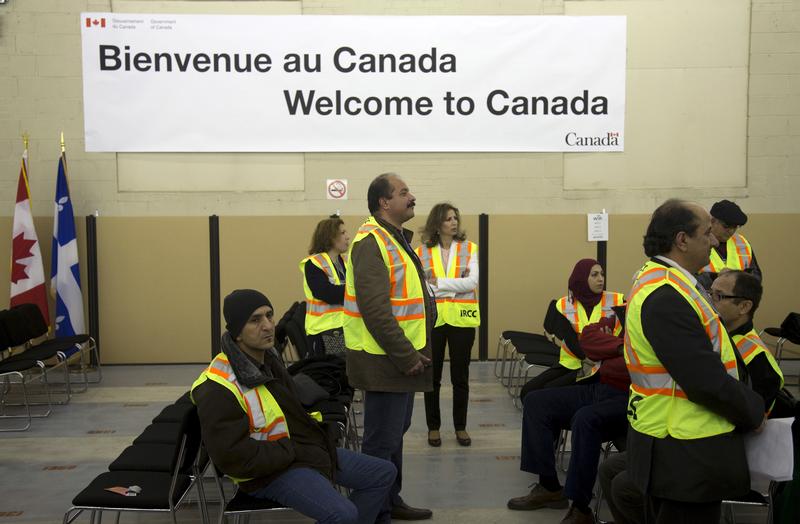 The U.S. president praised his neighbor’s merit-based entry system for foreigners. But administration restrictions on H-1B visas may deter high-skilled workers and their employers. That could send tech and engineering talent north to friendlier hosts, hurting American firms.

Immigration, Refugees and Citizenship Canada (IRCC) contractors including translators wait for the arrival of Syrian refugees at the Welcome Centre in Montreal, Quebec, December 12, 2015. REUTERS/Christinne Muschi

Starting in April, the U.S. Citizenship and Immigration Services will no longer offer expedited processing for H-1B work visas, the agency announced on March 3. The fast track, which cost an additional fee and guaranteed an answer in two weeks, was used by firms that depend on the H-1B system to quickly staff projects. Companies in the tech and financial services industries are among the top sponsors of H-1B visas.

Without an expedited program, companies will have to wait up to six months to make staffing decisions. The reform will come into effect in April, before the annual lottery for the 85,000 H-1B visas offered each year. Last year, the U.S. received 236,000 applications, a record high.

In his first address to Congress on Feb. 28, President Trump repeated a pledge to build a wall along the Mexican border and called for a “merit-based” immigration system similar to Canada’s. On March 9, Canadian government officials said they would launch a program in June to attract more overseas talent for highly skilled positions. The program will establish a two-week standard for processing work-permit applications, create a dedicated service for companies looking to make significant job-creating investments in Canada and drop the work permit requirement for short-term highly skilled employees.