From barter to martyr 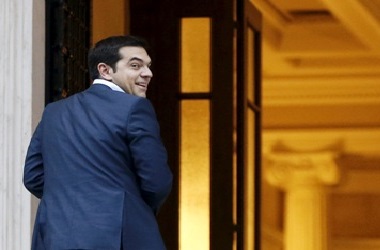 European creditors are wary of writing off Athens’ debts because it could set a precedent. Yet if Prime Minister Alexis Tsipras resigns after the referendum, a deal should be doable. Few politicians would follow his path of capital controls, economic strife and career implosion.

Greek Prime Minister Alexis Tsipras arrives at his office at the Maximos Mansion for a governmental council in Athens, Greece, June 26 2015. REUTERS/Alkis Konstantinidis

Greek debt may need to be written down if it is to be deemed sustainable, the International Monetary Fund wrote in a report published July 2. A haircut would be needed if Greece grows by 1 percent a year, and maintains a primary surplus of 2.5 percent of GDP. It may not need a haircut if it grows faster or maintains a higher primary surplus, but would still need debt extensions and interest rate holidays, the IMF wrote.

Greece will hold a referendum on whether to accept the terms of its bailout agreement on July 5.

Yanis Varoufakis, Greece’s finance minister said on July 2 he would not continue in his post if the country votes to approve the deal, Bloomberg said, quoting Varoufakis. Alexis Tsipras, Greece’s prime minister hinted in a speech on June 30 he would also resign if the vote goes against him.

Greek debt will reach 182 percent of GDP in 2015 Barclays estimated in a report published June 25.