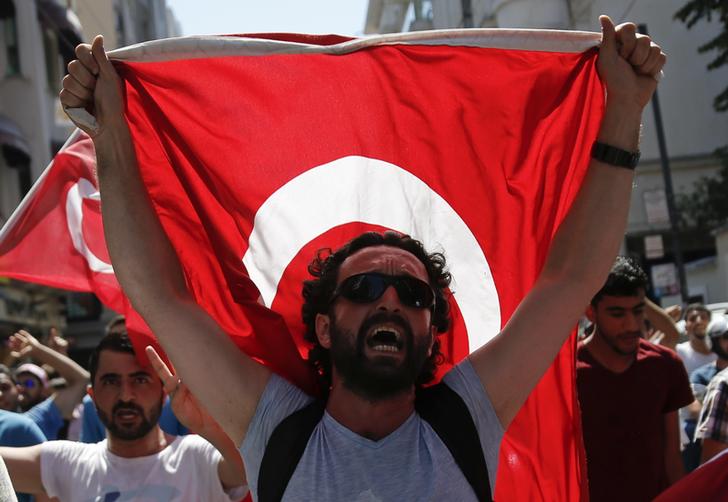 President Tayyip Erdogan’s government has few reasons for triumphalism after surviving an attempted military coup. Political uncertainty and economic damage now awaits a strategically important U.S. and European Union ally that is the gateway to the Middle East.

Erdogan will no doubt swiftly try to restore confidence in his government, though remnants of the uprising by a faction of the military were still being suppressed on July 16. But foreign capital is set to flee, and all the more quickly if he resorts to harsh reprisals. The Turkish lira fell 5 percent to a three-week low in late U.S. trading on July 15 and further declines are likely.

This will be a worry for a country whose gross external debt rose to 56 percent of GDP last year, with a third of the stock of such debt maturing in 12 months or sooner, according to the International Monetary Fund. Companies and banks may find it hard to roll over external debt. Any credit crunch would exacerbate the economic damage that the failed coup is already bound to inflict.

About 500,000 people are employed in tourism, which accounts for roughly 5 percent of GDP. The failed coup and its aftermath will harm an industry already blighted by the country’s tensions with Russia and a series of bomb attacks.

The economy has so far been resilient despite these problems and its exposure to the nearby conflict in Syria, which include absorbing more than a couple of million refugees. The latest shock will, however, be harder to resist.

An economic downturn and the risk of a political crackdown could make Erdogan a less reliable ally for the United States and the European Union. For example, the former uses the Incirlik air base in Turkey to launch strikes against Islamic State, which holds territory in Syria and Iraq. Meanwhile, the latter relies on Turkey to reduce the number of Syrian migrants that enter its borders. The international political and market ramifications of the failed coup will persist for far longer than the uprising itself.

Forces loyal to Turkey’s President Tayyip Erdogan were fighting on July 16 to suppress the remnants of a military coup that had threatened to overthrow the government.

After a night of violence, Reuters reported that 90 people were killed, including many civilians, after a faction of the armed forces tried to seize power with the use of tanks and attack helicopters.

Erdogan said perpetrators of the attempted coup would “pay a heavy price”.

The value of the Turkish lira fell in late U.S. trading on July 15 after Prime Minister Binali Yildirim said a group within the military had attempted to overthrow the government. There was also a spike in oil prices.