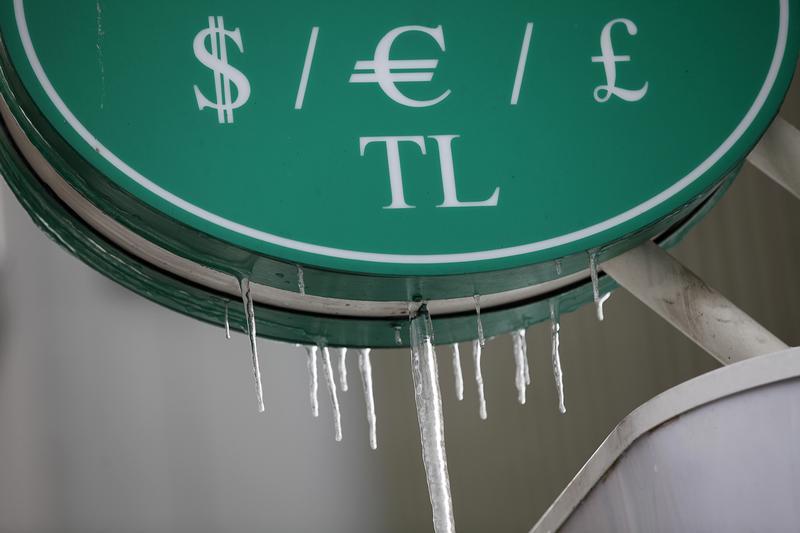 The central bank has ruled out raising interest rates to defend the lira but can only count on a thinning cushion of foreign reserves. Governor Erdem Basci hinted at expanding his unorthodox policy tool kit. In such uncertain times, such creativity will have to be compelling.

Turkish Lira (TL) and international currency symbols are seen over an ATM machine of a bank in central Istanbul February 1, 2012.

Turkish central bank Governor Erdem Basci said on Aug. 27 that he will not hike interest rates any further to defend the sliding lira and hinted at introducing new monetary policy tools.
“We will not be using our interest rate weapon against the exchange rate,” Basci told the state-run Anadolu news agency (AA).
“Since we will not be using this then we are left with the balance sheet weapon, and that is a very powerful weapon,” he added.
“Don’t expect a shock from us on the interest rate side, just expect interesting manoeuvres on the forex side that will result in an appreciation of the lira,” said Basci.
Basci said the central bank had $40 billion in reserves which it could use to shore up the lira and would intervene defensively as needed to reduce exchange-rate volatility.
The lira weakened to 2.039 to the dollar by 0610 GMT on Aug. 29.
Basci said the average cost of lira funding would remain between 6.75 percent, the rate at which it funds primary dealers, and 7.75 percent until inflation drops to its year-end forecast of 6.2 percent.