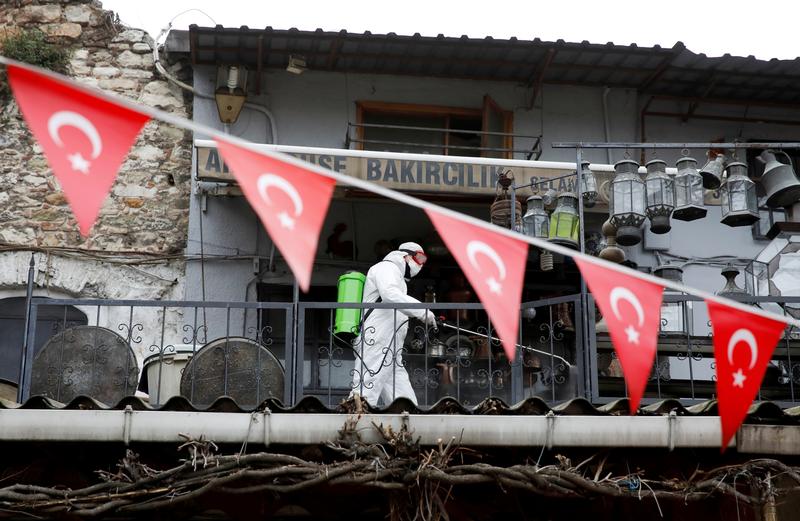 Saddled with dwindling FX reserves, high inflation and a budget deficit, Turkey’s President Tayyip Erdogan is asking for aid from individuals and firms to protect society’s most vulnerable from the Covid-19 fallout. But so far the biggest contributors are stretched state banks.

A worker in a protective suit sprays disinfectant at Grand Bazaar, known as the Covered Bazaar, to prevent the spread of coronavirus disease (COVID-19), in Istanbul, Turkey, March 25, 2020.

Turkey has been asking individuals and companies to contribute to a donation fund held by the Ministry of Family, Labour and Social Services.

According to a website inviting donations, 1.6 billion lira ($238 million) had been raised as of April 13. The biggest contributor listed on the site was the central bank, having donated 100 million lira, followed by state-owned banks Halkbank, which is fighting U.S. charges on Iranian sanctions evasion, Ziraat Bankasi and Turkiye Vakiflar Bankasi.

As of April 13, Turkey’s Covid-19 death toll was 1,296 with 61,049 confirmed cases. Many people have had to stop work as authorities closed shopping centres, bars, cafes and other businesses in an attempt to contain the coronavirus outbreak.

The Turkish government plans to send draft legislation temporarily banning layoffs to parliament later in April, to curb an expected jump in unemployment due to the spread of coronavirus, Reuters reported on April 9. The government has also offered to pay 60% of the wages of employees working in businesses suffering from the outbreak, while state banks have offered loans to companies that keep their employee headcount stable during this period.