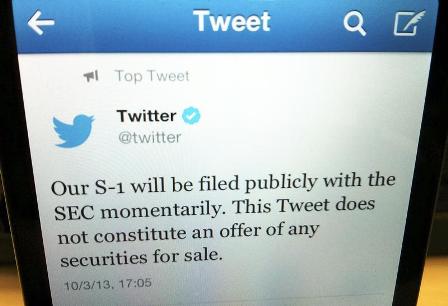 Twitter has staked its claim as the tech world’s least-evil initial public offering. The microblog service’s $1 billion filing is a model of simplicity. There is one class of stock. Existing investors aren’t selling. The chief executive hasn’t written a sappy, incomprehensible letter. And growth is roaring. Twitter’s stock still carries risks, but avoiding many excesses Silicon Valley companies indulge in when going public is encouraging.

The likes of Facebook, Zynga and Google, for example, decided it was more important to keep control in the hands of their founders than promote democratic capitalism. So they devised dual—and even, in the case of Zynga, triple—class stock structures that granted certain individuals more votes than their economic stakes warranted. Twitter, meanwhile, is leaving minority investors in charge of their own destiny.

Twitter’s backers aren’t using the float as a way to dump overpriced stock into retail investors’ hands, either. That’s what Facebook did last year. It took investors a year to overcome their perception that management didn’t care about minority shareholders. Instead, Twitter will reap all the proceeds from selling the stock and use them to invest in the company, pay taxes associated with past stock grants and even fund possible acquisitions.

While even pedestrian companies like Container Store now have their managers write about how the company is changing the world (always for the better, naturally), Twitter lets its growth stand on its own. And it’s impressive: revenue has grown more than ten-fold over the past two years, leaving the company on track for about $700 million of sales in 2013. Twitter is growing in popularity quickly, appears to have a durable platform that users check compulsively and collects huge reams of data valuable for advertisers.

It’s not all roses. The company has never made a profit and lost $69 million in the six months to June, compared with $79 million for the whole of 2012. And the valuation looks toppy if it floats at more than $12 billion, based on the worth the company has put on existing equity. That equates to well over 15 times revenue if it does reach $700 million of sales this year. But those risks are at least understandable in a high-tech growth company. There’s no reason for a company to have an IPO more complex than Twitter’s.

A tweet from Twitter Inc. announcing its IPO filing is shown in this photo illustration in Toronto, October 3, 2013. REUTERS/Hyungwon Kang

On Oct. 3, Twitter filed public documents with the Securities and Exchange Commission to sell $1 billion of stock in an initial public offering. The social messaging service did not disclose the number of shares it proposes to sell or their price.
The company had $254 million of revenue in the first half of the year, compared to $122 million in the first half of 2012. Twitter had an operating loss of $63 million in the first six months of this year. It has never made a profit.
The company has one class of stock. Existing shareholders will not be selling in the IPO. The company will use the proceeds for general corporate purposes, capital expenditure, the payment of taxes on restricted stock granted to employees and possible acquisitions.