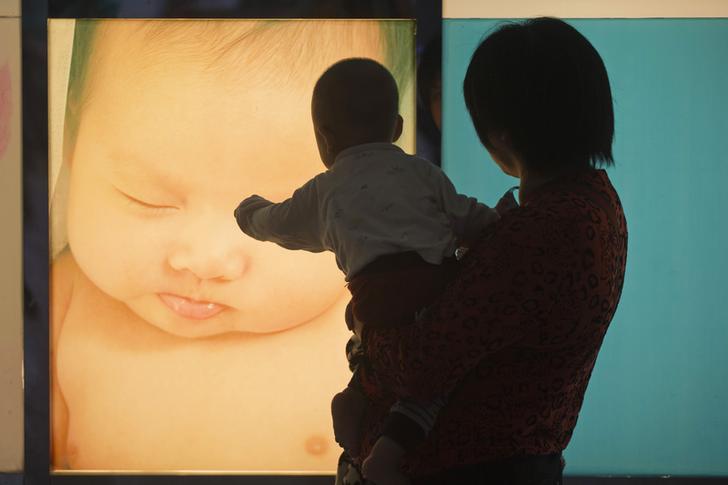 China needs more babies to counter its ageing population and shrinking workforce. But relaxing the country’s one-child rule may not be enough to convince increasingly prosperous Chinese women to have more children. Even if effective, the shift would only have a marginal impact on the economy.

For over three decades, China’s one-child policy has been harshly but unevenly enforced. Rural families, ethnic minorities and couples that are both only children are already exempt. Now the authorities are considering allowing families where just one parent is an only child to have two children, according to Chinese media reports. A blanket two-child policy is also under discussion.

Though a change is far from assured, the discussion reflects China’s ageing demographics. Today, people aged 60 and above make up just 15.5 percent of total population, while those aged 15 to 59 account for 68.1 percent, according to one United Nations estimate. However, the share of elderly is expected to jump to 39.3 percent of the population by 2050, while the working age population will contract to 52.5 percent.

Phasing out the one-child policy may not be enough to persuade women to have more children, however. Economic growth is often associated with lower fertility as more educated women join the workforce. China’s fertility rate – the average number of children born to each woman – is currently estimated at around 1.4. Shanghai and Beijing have fertility rates of less than one, as an increasing number of women choose not to have children at all. Another factor is the soaring cost of living, particularly in cities.

Even if a two-child policy spurred women to have more children, the economic impact would be marginal. Today, China has 79 million urban women aged 20 to 39. Assume that two-thirds of those are restricted by the current policy, and that half of those that were allowed to have a second child under a revised rule did so over the next decade. That would mean 2.6 million extra babies a year, compared to the 16 million or so already likely to be born each year. Such a baby boom might lift consumer spending on nappies, strollers and baby food. But it would come too late to seriously shift China’s ageing demographics.

A baby reacts in front of a poster at the Guangzhou Women and Children's medical centre in the southern Chinese city of Guangzhou May 8, 2013

Chinese authorities are considering proposals to relax the country’s one-child policy by allowing families to have two children if one parent is an only child, according to Chinese media reports on Aug. 2.

Currently, couples that are both only children are eligible to have two children. Ethnic minorities, rural families with a female first child are also exempt from the one-child policy that China has enforced since 1979.

A second proposal to replace the one-child policy with a blanket two-child policy entirely after 2015 is also being considered, according to the same source close to the National Health and Family Planning Commission cited by Chinese media.

However, policy changes currently being considered do not necessarily refer to relaxing the one-child policy, an official spokesperson for the National Health and Family Planning Commission stated on August 8th.