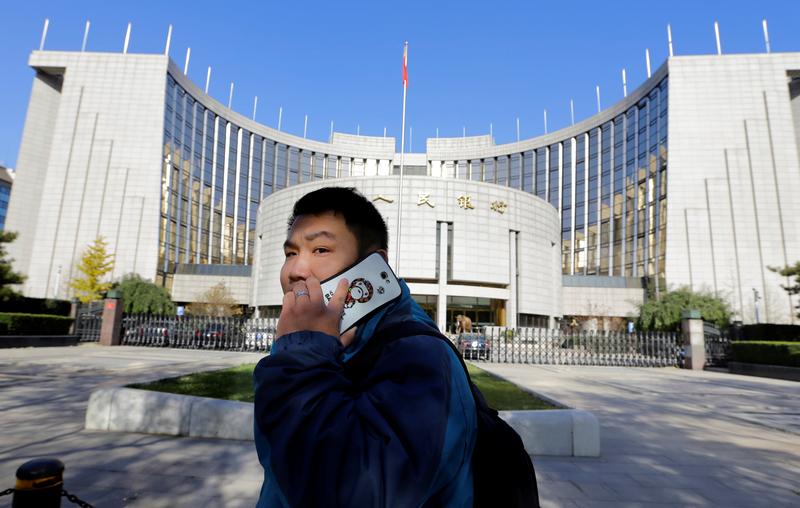 Yields are soaring on the prospect of a rapid rise in U.S. interest rates. Beijing needs to defend the currency, and prevent new bubbles, so its options are limited. Authorities have to restore calm while avoiding the ham-fisted tactics that failed during the stock market crash.

A man uses his mobile phone while walking past the headquarters of the People's Bank of China (PBOC), the central bank, in Beijing, November 20, 2013. REUTERS/Jason Lee/File Photo - RTX2PSUT

China's benchmark 10-year treasury futures tumbled the maximum allowed 2 percent on Dec. 15, after the U.S. Federal Reserve signalled more rate hikes in 2017 than many had expected.

The yield on the benchmark 10-year China government bond has risen sharply in recent days to trade at around 3.3 percent, its highest level since September 2015.

Short-term money-market rates have also risen. That will increase funding costs for banks, in particular smaller ones which depend more heavily on this market for financing.

The Fed lifted its federal funds rate to between 0.5 and 0.75 percent on Dec. 14, the first such increase in a year. Policymakers projected three possible rate increases in 2017, more than the market consensus.

China's official Xinhua news service said: "If the United States accelerates its rate hike pace in the future, a stronger dollar would bring disorder worldwide," adding that it was questionable whether the U.S. economy could sustain a faster pace of hikes.