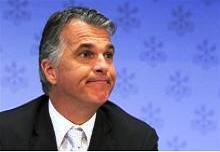 UBS is going where no bank has yet dared to tread. The Swiss wealth manager and investment bank is poised to reveal a radical strategy that could see it pull out of fixed-income trading. Such a plan would be expensive and slow to execute – that’s why rivals typically think such moves are impossible. But the decision could prove an industry game-changer.

Sergio Ermotti’s reported assault on fixed income goes way further than the strategic review he unveiled after being appointed chief executive in November 2011.

It’s easy to see why. Trading losses have ruined the bank’s attempts to bolster risk management. Fixed income, currencies and commodities (FICC) has barely contributed to the bottom line in recent years while consuming about half of the group’s allocated equity.

But winding down a FICC business would be no walk in the park. Trading books have credit and derivative exposures that would pose risks – and hog capital – for years. Keeping key personnel like investment banking co-head Carsten Kengeter wouldn’t be cheap – and there would be no new business revenue to help out. There would be opportunity cost too if markets recover. The cost-benefit analysis may be favourable only on a very long view.

Execution of any strategic renewal is going to be perilous. But Ermotti’s long-term focus makes intuitive sense for UBS. The investment bank could plausibly emerge as a kind of mega-boutique with an advisory and finance franchise serving corporate clients, piggybacking off an equities business focused on investment clients – consistent with the old Warburg business at its heart. If that’s really what Ermotti has in mind, ripping apart the current structure is probably the only sure way of getting there.

Some firms may rejoice that UBS is cutting capacity, and take it as an excuse to stay in the market. That would be a shame: having fewer desks around will assist in global deleveraging.

Of course, Ermotti wouldn’t be alone in culling entire businesses. Royal Bank of Scotland has cut equities and advisory while keeping fixed income. But Ermotti’s peers generally prefer snipping jobs here and there to destroy-and-rebuild. If shareholders cheer his vision when the plans are fleshed out, UBS’s rivals would find it harder to defend their current business models as the only game in town.

UBS is set to reveal a split of its investment bank next week, leading to the loss of up to 10,000 jobs, the Financial Times reported on Oct. 27.
The move will involve a spin-off of the Swiss bank’s fixed income trading division, which may be wound down over time. The separated unit would be managed by investment banking co-head Carsten Kengeter.
UBS is also planning to reduce risk-weighted assets by up to 100 billion Swiss francs as part of the split, the FT reported.
The remaining core of the investment bank would consist of foreign exchange and equities trading along with advisory and underwriting. Andrea Orcel, who joined UBS from Bank of America Merrill Lynch in August, currently runs investment banking alongside Kengeter.
Sergio Ermotti has reshaped the group since taking over as UBS chief executive on a permanent basis a year ago, cutting back the investment bank and promoting wealth management.
Ermotti’s appointment followed the resignation of Oswald Gruebel, who stepped down in the wake of an unauthorised trading loss of 2.3 billion Swiss francs. UBS equity derivatives trader Kweku Adoboli was arrested in connection with the loss and is currently being tried in London.
At Adoboli’s trial, the court heard evidence earlier this month that an internal investigation by UBS following the losses had uncovered three further cases of unauthorised trading at the investment bank.
UBS reports third-quarter results on Oct. 30.