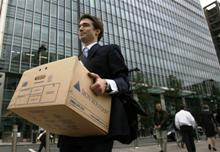 The Libor fines widen the already gigantic gap between pre-crisis self-image and reality at the Swiss bank. Even after a big 2008 mea culpa, rates traders engaged in routine, casual wrongdoing. The bank was so convinced it was fundamentally boring that it couldn’t face reality.

A worker carries a box out of the US investment bank Lehman Brothers offices in the Canary Wharf district of London in this September 15 2008 file photo. REUTERS/Andrew Winning

UBS said on Dec. 19 that it agreed to pay about 1.4 billion Swiss francs in fines and disgorgement to United States, UK and Swiss authorities to settle investigations into whether it had rigged the London Interbank Offered Rate, which is used to set terms for a wide range of financial contracts worldwide.
As part of the agreement with the U.S. Department of Justice, a Japanese unit of UBS pleaded guilty to one count of wire fraud. The Swiss bank said it would continue operations in the country.
UBS also said it expected to suffer a loss of between 2 billion to 2.5 billion francs in the fourth quarter, chiefly as a result of provisions for litigation and unspecified effects of regulation.
UBS Chief Executive Sergio Ermotti, in a memo to staff seen by Breakingviews, said “we are far from having an understanding … how clients were affected”.