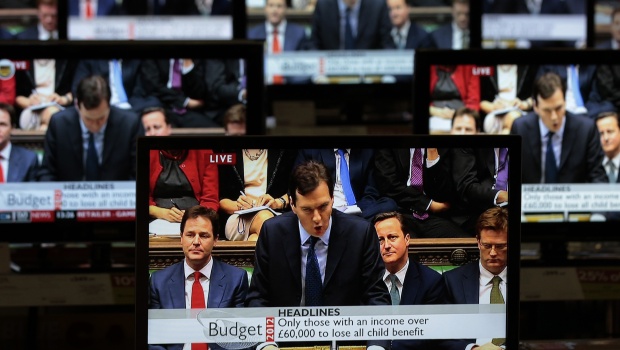 George Osborne deserves a lukewarm round of applause. Britain’s chancellor, pinned down by a still-large deficit and rating agencies threatening the UK’s triple-A credit rating, tried to work some tricks into his budget. Cutting taxes for the very rich and less well-off, and further lowering corporation tax, is mildly positive for optimism, growth and recovery. But the need to maintain fiscal sobriety means that what Osborne gives with one hand, he has to take with the other.

Osborne claimed the budget rewards work, backs business and reforms the tax system. It does, but in meagre measures. In fiscal terms, the main change is his decision to lift the threshold at which personal income tax kicks in. That helps the low-paid, and encourages them to work rather than take benefit.

Cutting corporation tax by a further percentage point, to 24 percent, will be welcomed by business. Like Ireland, the UK may find that low headline rates of corporation tax help to attract foreign investment and stimulate diversification of the economy, growth and employment.

In political terms, however, Osborne’s biggest decision was to lower the top rate of income tax – paid by those earning more than 150,000 pounds – to 45 percent from 50 percent next year. The tax, introduced by the previous Labour administration, seems to have generated minimal revenue: lowering it is expected to cost the exchequer just 100 million pounds a year. That’s less than a fifth of what Osborne expects to raise by increasing stamp duty on expensive house purchases, and by closing tax loopholes exploited by the wealthy.

Income taxes are a disincentive to work and some high earners will have worked less, evaded more or decamped. Still, the government will be vulnerable to claims that it is cutting taxes for the rich while punishing the less well-off – most notably pensioners, whose tax allowances have been frozen.

Unfortunately the UK’s public finances give Osborne little scope for generosity. For all the talk of austerity and spending cuts, the government will still pump 6 percent of GDP into a slow-growing economy in 2012/13. Whatever Osborne’s critics say, there is little more he could have done for growth without risking fiscal sobriety – and the government’s entire plan for recovery.

George Osborne, Britain’s chancellor of the Exchequer, cut personal income taxes but aimed new levies at the wealthy on March 21 as he pledged to stick to the country’s tough austerity plan.
Osborne said he would cut Britain’s top rate of tax from 50 percent to 45 percent from April 2013, but also set out plans to benefit the poorest by raising the threshold for income tax to 9,205 pounds.
Osborne announced a raft of measures designed to target the rich. He increased stamp duty tax on homes worth more than 2 million pounds to 7 percent, from the current 5 percent, and also adopted measures designed to prevent rich homebuyers from avoiding the tax by buying property through corporations.
In a move aimed at luring businesses to Britain, the rate of corporation tax will be lowered by two percentage points to 24 percent in April - double the previously planned cut. However, the cost of the move will be offset by an increase in the UK bank levy and measures targeted at North Sea oil and gas producers.
The UK government’s Office for Budget Responsibility forecast that growth should pick up from the 0.8 percent predicted for 2012 to 2 percent next year and 2.7 percent in 2014, leaving its November predictions largely unchanged.
The government’s OBR forecast predicted that net borrowing would fall from 126 billion pounds in 2011/2012 to 21 billion in 2016/2017.
Overall Britain’s public sector debt as a share of gross domestic product (GDP) will peak at 76.3 percent in 2014/15 before falling, fulfilling the second part of the fiscal target.