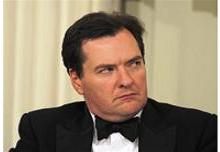 George Osborne has his hands tied. Britain’s Chancellor of the Exchequer wants to boost a flat economy but he needs to tighten policy to hit his targets and meet his own fiscal rules. He may well be able to square the circle in next week’s Autumn Statement – by taking from the rich and putting money into poorer hands that are eager to spend.

Pension perks are an obvious target. Some of the rules surrounding retirement provision look more like tax planning for the privileged. Osborne has already reduced the annual cap on tax breaks on pension contributions, from 255,000 pounds to 50,000 pounds. He could go further still, to say 40,000, or even 30,000 pounds. Still, neither move would bring in more than 1 billion pounds. To get over that level, Osborne could also cap the sum of money enjoyed tax-free when pensions are drawn. At present 25 percent of a pension pot that can go as high as 1.5 million pounds can be taken tax free on retirement.

High-value homes are another lucrative revenue opportunity. Osborne has so far resisted pressure from the Liberal Democrats, the junior partner in the coalition government, for a “mansion tax”. An alternative would be to reform the current Council Tax on property, which charges the very wealthy little more than it does most Britons, by adding extra charges for the most expensive homes. The two highest Council Tax bands include 939,000 properties. Increasing the annual levy on these by 1,050 pounds would bring the Chancellor another 1 billion pounds.

Such measures could then fund a mini stimulus. Freeing more low earners from tax might increase consumer spending and economic growth. The personal income-tax threshold is already due to rise to 9,205 pounds. Osborne could afford to go further – spending 1.2 billion pounds to up it by 200 pounds. There’d be some change to pay for back-to-work scheme for depressed construction workers. A billion pounds in accelerated capital spending might generate a bit more growth, without sacrificing austerity.

Osborne’s last budget saw him play Sheriff of Nottingham. This time he should aim for Robin Hood.

Britain's Chancellor of the Exchequer George Osborne listens to a speech by Mervyn King, the Governor of the Bank of England at the Mansion House Banquet in the City of London June 14, 2012. REUTERS/Paul Hackett