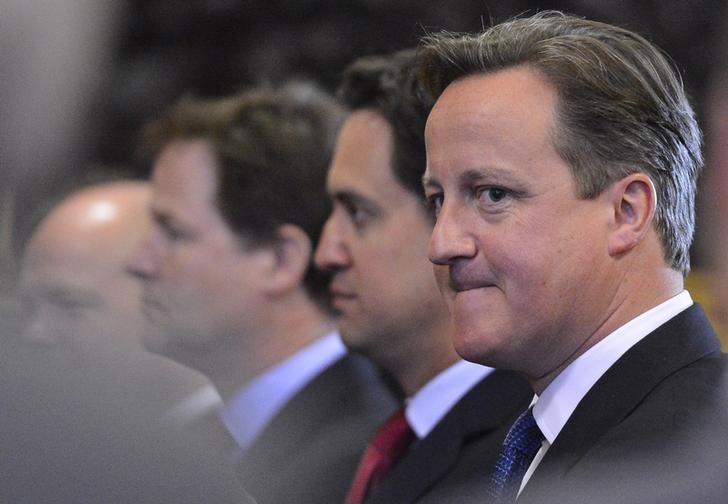 British politicians are drawing up battle lines more than a year before general elections. On current form, the left-leaning opposition could oust the governing coalition. However, any knee-jerk investor dismay may be tempered given the Labour Party is more likely to cement the UK’s place in the European Union than the ruling Conservatives.

Prime Minister David Cameron says he wants to renegotiate ties with the bloc. He also plans a referendum on whether Britain should stay in the EU if his party wins the next election. The Liberal Democrats, who currently share power, oppose the idea. Labour, which is leading in opinion polls, says it won’t mimic Cameron’s plebiscite promise.

Britain has its own currency, and its monetary policy is autonomous, but EU membership matters to investors. They typically prefer stability and will take a dim view of any move that jeopardises the trade and economic benefits which come with such membership. Moreover, the risk of an exit would trigger huge uncertainty, not least about investment by domestic and foreign firms, and hurt growth.

Movements in the price of gilts, and sterling, may therefore be far more sensitive to referendum risks than to differences between the parties’ economic and fiscal pledges. That’s all the more so given policy divergences could be more limited than might be expected at a time when recovery is taking hold. Labour may avoid gilt-damaging promises of spending splurges given its overall poll lead masks lower ratings than the Tories when it comes to public trust in dealing with the deficit and improving the economy.

Of course, with so many ifs and buts lying in the way of any referendum, gilts are subject to plenty of other influences. UK monetary policy is the most obvious given shifting rate expectations led 10-year gilt yields to nearly double in the past year, to 2.96 percent. And pension fund demand for UK government bonds is a source of constant support.

However, the EU question will loom larger as election fever grows. The race is not quite a win-win situation for investors. Still, the Tory referendum pledge makes the prospect of a Labour victory a far less unsettling prospect for gilt investors than might otherwise be the case.