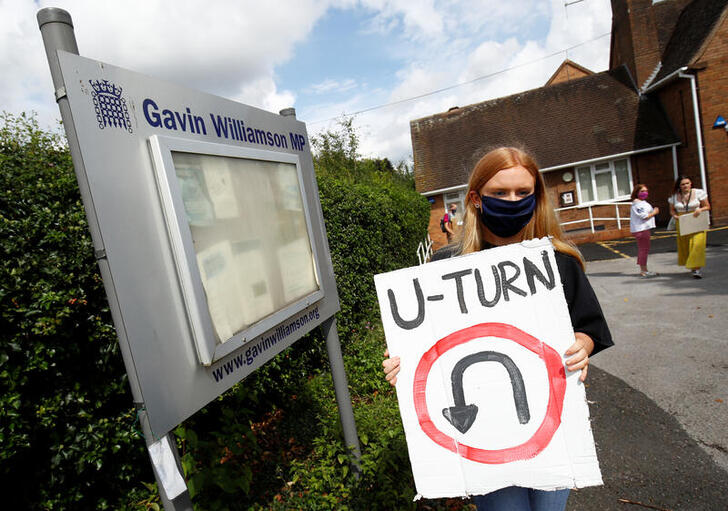 Popular fury forced the abandonment of hypothetical calculations of likely grades for Covid-canceled national exams. From credit scoring to criminal sentencing, even well-intentioned models of this kind make many harmful mistakes. Most victims lack the clout to force a reversal.

An A-level student holds a placard as she protests about the exam results at the constituency offices of Education Secretary Gavin Williamson, amid the spread of the coronavirus disease (COVID-19), in South Staffordshire, Britain, August 17, 2020.

The British government on Aug. 17 bowed to public pressure over its school exam grading system, ditching an algorithm that downgraded the results awarded to students in England after their tests were canceled due to Covid-19.

The government had faced days of criticism after the mathematical model used to assess predictions made by teachers lowered grades for almost 40% of students taking A-levels, their main school-leaving exams.

Adjustments by algorithm have also been abandoned for so-called GCSE exams, typically taken two years before A-levels, for which results are due out on Aug. 20.

Students will now be awarded the grade that their teachers had predicted for them based on past performance, Conservative Prime Minister Boris Johnson’s government said.

The decision, which applies to England, mirrors those made by devolved administrations in Wales and Northern Ireland on the same day, and in Scotland last week.

Analysis of the algorithm showed it had resulted in “manifest injustice,” favoring students in fee-paying private schools, said Paul Johnson, director of the Institute for Fiscal Studies think tank, writing for the Times.