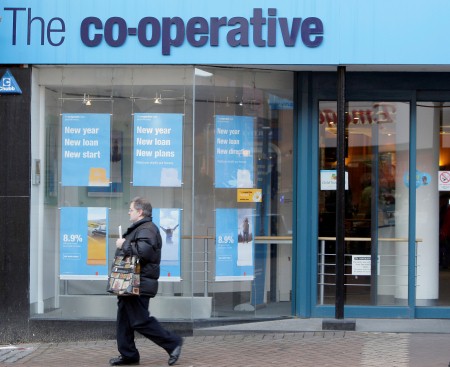 Regulators still haven’t nailed down how much capital the mutual lender needs. Despite a savage downgrade and shuttering new corporate lending, the need to sustain competition in UK banking should guarantee Co-op’s future. But that doesn’t mean it could withstand deposit flight.

A pedestrian walks past the Co-operative bank in Northampton

Some local authorities have withdrawn funds from the Co-operative Bank since the UK mutual suffered a six-notch downgrade by Moody’s in May, according to a person familiar with the situation. The moves were reported first in the Financial Times on June 1.
However, some funds had been re-deposited with the bank at higher rates of interest, the person added.
Co-op drew down 900 million pounds of cheap liquidity from the UK’s Funding for Lending Scheme in the first quarter of 2013, Bank of England figures revealed on June 3.