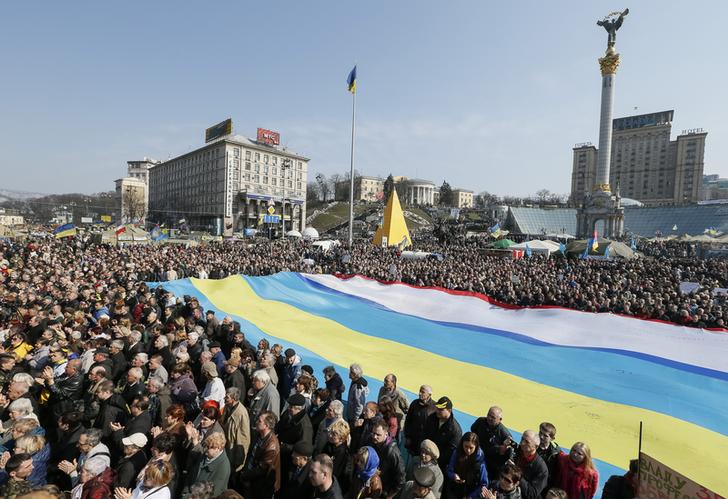 The International Monetary Fund has just invented delayed shock therapy. Its bailout package for Ukraine will help the country deal with financial emergency. The Fund hasn’t given up on conditionality, but it has been clever enough to recognise that political turmoil and the transitional nature of the Kiev government don’t allow for the type of tough love that could backfire. Ukrainians won’t have a credible administration capable of making long-term pledges until they choose a president on May 25.

So Ukraine will have a hand-to-mouth existence in the next two months, but with serious hopes that its financial situation will improve after that. The IMF’s announcement will also trigger other financial support from the European Union and the United States, taking the global aid package to $27 billion. The country’s interim prime minister had previously estimated financial needs over the next two years at $35 billion.

The list of reforms Ukraine needs is well-known – and has been at the centre of the country’s dispute with the IMF in the past. Two previous attempts at financial rescue failed because of the unwillingness or inability of Kiev’s successive governments to make good on their promises. But the latest Ukrainian revolution has helped focus minds and some needed changes are already under way, either forced or deliberate. The hryvnia, Ukraine’s currency, had to be left floating, and has depreciated by 26 percent since the beginning of the year: the central bank couldn’t keep spending reserves to defend its fixed peg. The transitional government has just announced a 50 percent hike in energy tariffs, a step towards a longstanding IMF demand for the elimination of energy subsidies.

Ukraine will have to keep pushing and do more – notably to fix the over-indebted, inefficient and corrupt national gas company Naftogaz, whose losses last year amounted to 2 percent of gross domestic product, adding to the 4.5 percent fiscal deficit.

Two words aren’t mentioned in the IMF release: “default” and “Russia.” At some point in time Ukraine may have to consider the former. And it cannot avoid negotiating with the latter. For now, the IMF aid gives financial and political support to navigate through some tough months ahead.

The International Monetary Fund on March 27 announced an agreement on a $14 to $18 billion standby credit for Kiev in return for economic reforms that will unlock further aid from the European Union, the United States and other lenders over two years.

An IMF statement said: “The financial support from the broader international community that the programme will unlock amounts to $27 billion over the next two years.”

Kiev opened the way for the IMF deal by announcing on March 25 a radical 50 percent hike in the price of domestic gas from May 1 and promising to phase out remaining energy subsidies by 2016. It also accepted a flexible exchange rate and a central bank monetary policy based on inflation targeting. Inflation is set to hit 12 to 14 percent this year, according to the government.