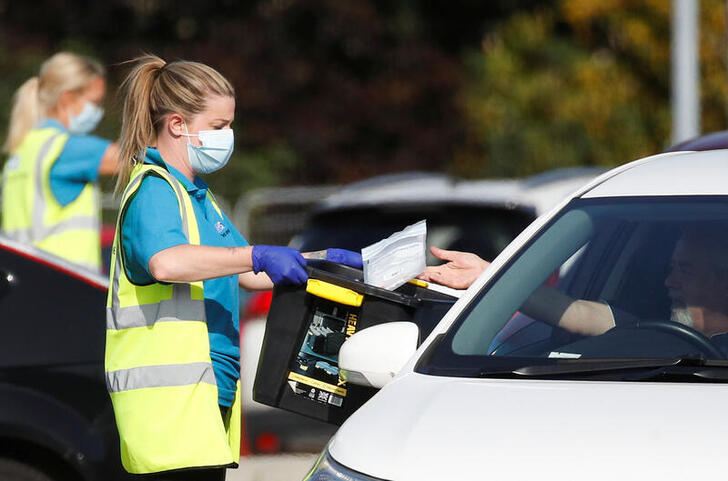 Prime Minister Boris Johnson is rolling out mass testing in the city of Liverpool to fight the coronavirus. Such plans have worked in China, but infected British citizens may resist being quarantined. Without penalties or more help, the scheme may be an elaborate waste of money.

A driver drops a test for a coronavirus into a box at a test centre amid the coronavirus disease (COVID-19) outbreak, in Bolton, Britain, September 17, 2020.

The British government will launch a new mass testing pilot scheme for Covid-19 in Liverpool on Nov. 6, offering everyone in the city tests whether or not they have symptoms.

Prime Minister Boris Johnson has been forced to impose a second national lockdown on England, following the rapid spread over the coronavirus in recent weeks. The second lockdown will start on Nov. 5.

The government said the Liverpool pilot would initially use polymerise chain reaction swab tests, the current most widely used testing method, but will also incorporate so-called lateral flow tests aimed, which avoid the need for laboratory processing and can produce results in 15 minutes.

Everyone living or working in the city in northwest England, one of the worst-hit in the country, will be offered repeat tests at existing sites, as well as numerous new sites including care homes, schools, universities and workplaces. Some 2,000 military personnel will be deployed in the city from Nov. 5 to help deliver the tests.

Liverpool was the first city to be placed in the highest of three alert levels in England’s tiered response system. Weekly cases stood at over 410 per 100,000 people as of Oct. 25.